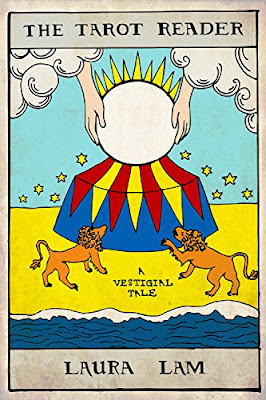 Cyan Zhu is the best tarot reader Riley & Batheo’s Circus of Curiosities has ever seen. Too good, some say. She reads the cards, but she can also tell more about her customers than they could ever suspect. Two people walk into Cyan’s cart to have their fortunes told and change her life forever: Oliver, a sailor with a pretty grin, and a mysterious man with a blurred face, who sends her terrible visions that might come true.

Review:
The Vestigial Tales are short stories set in the same world as Laura Lam's Micha Grey series. They give readers a bit more insight into the Vestige artefacts that were left behind when the Alder retreated from the world. The Tarot Reader actually gives us a bit more insight into Cyan, a character we were introduced to during Shadowplay. Although events in this story occur before Shadowplay I actually think you'll enjoy it more if you read it afterwards, Cyan's character is a bit of a mystery during the book and I enjoyed unravelling her secrets alongside Micha but it was great to go back now and fill in some of the details.

The Tarot Reader was my favourite of the Vestigial Tales so far, I loved getting to see more about Cyan's life when she was working for Riley & Batheo’s Circus of Curiosities. How her secret ability helped her so much with her Tarot readings and what happened when her parents found out about what she could do. We also get to see her first meeting with Oli and watch their romance blossom. This was a really sweet story and it left me excited to see more of Drystan's past in The Card Sharp.