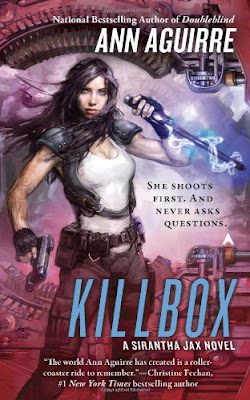 Talk is cheap when lives are in jeopardy.

Sirantha Jax is a "jumper," a woman who possesses the unique genetic makeup needed to navigate faster-than-light ships through grimspace. With no tolerance for political diplomacy, she quits her ambassador post so she can get back to saving the universe the way she does best - by mouthing off and kicking butt.

And her tactics are needed more than ever. Flesh-eating aliens are attacking stations on the outskirts of space, and for many people, the Conglomerate's forces are arriving too late to serve and protect them.

Now Jax must take matters into her own hands by recruiting a militia to defend the frontiers - out of the worst criminals, mercenaries, and raiders who ever travelled through grimspace . . .

Review:
Diplomacy has never been Jax's biggest strength so she's relieved to have resigned from her role as Ambassador and trying to figure out what to do with her life next. Then March gets an offer from the Conglomerate that he can't refuse, they want him to recruit a military fleet for them and marshal their forces against the human-eating Morgut who are currently plaguing the most vulnerable human outposts in the far reaches of space. Jax jumps at the chance of being in the action again and is more than willing to start training the next generation of jumpers on navigating Grimspace. It's time for humanity to come out fighting and show the Morgut that we're not a race to be messed with.

After the slower pace of Doubleblind I was thrilled to be back in the thick of the action for Killbox. The universe has been in disarray since Jax helped bring down Farwan, as much as the corporation committed terrible atrocities they did have the manpower and ships required to keep the peace and protect the humans spread across the galaxy. Now pirates and privateers are making life difficult for honest traders and it's up to March and Jax to try and convince the mercenaries to join with them and fight for the conglomerate rather than against them. There is definitely a lot going on in this book and I flew through the pages desperately trying to figure out what would happen next.

I have to admit I was slightly disappointed by a few things though. Firstly I wasn't happy with the new barriers put in the way of Jax and March's relationship, I love them best when they're working together for a common goal and it's getting a little tired that in pretty much every book something comes between them and forces them apart. I was also upset that the core crew ended up spending much of their time apart from each other and I particularly missed Vel's character. I understand why he was needed elsewhere but I love him so much and I didn't like how isolated Jax became as her friends all went off in their own directions. I was extremely upset at Doc's actions too, I think his story could have been handled in a hundred other ways that wouldn't have annoyed me as much as what actually happened and it's going to take a lot to make me interested in forgiving him.

I don't want to sound too negative though because this was still a brilliant book and there was so much to love about it. Jax is her awesome self, I still love March in spite of his stupid choices, Dina and Hit are brilliant together, Constance is really coming into her own and I adore Vel. Throw in some familiar faces from the past and we really do have a brilliant central cast of characters. We get loads of action, plenty of danger and Jax sticking her neck out for the people she loves. I'm a little worried about what she did at the very end of the story and the book ends on a killer cliffhanger but that's okay because the entire series has been published so I'm not going to have to wait around for the next instalment. This is such a fun series and I can't wait to continue reading it!