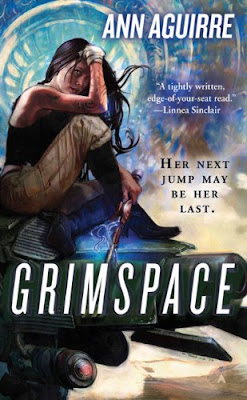 By all accounts, Sirantha Jax should have burned out years ago...

As the carrier of a rare gene, Jax has the ability to jump ships through grimspace—a talent which cuts into her life expectancy, but makes her a highly prized navigator for the Corp. But then the ship she’s navigating crash-lands, and she’s accused of killing everyone on board. It’s hard for Jax to defend herself: she has no memory of the crash.

Now imprisoned and the subject of a ruthless interrogation, Jax is on the verge of madness. Then a mysterious man breaks into her cell, offering her freedom—for a price. March needs Jax to help his small band of rogue fighters break the Corp monopoly on interstellar travel—and establish a new breed of jumper.

Jax is only good at one thing—grimspace—and it will eventually kill her. So she may as well have some fun in the meantime...

Review:
Sirantha Jax has a rare genetic ability to navigate through Grimspace, her talent is highly sought after and she's always been considered a bit of a celebrity because of that. It all goes horribly wrong when a ship she is navigating crashes killing over 80 people, Jax is the only survivor but she has no memory of how the crash happened. The Corporation she works for seem to believe it was her fault though and she has been a prisoner ever since undergoing psych-evaluations and constant questioning. When a mysterious man breaks into her cell and offers her the chance at freedom it's a chance she has to take, even if it does come with a very high price and leave her with a price on her head.

It's been a long time since the first book in a series grabbed me quite as hard as Grimspace did. I was totally hooked from the very first page and if I'd had more time on my hands I could easily have devoured this in a day. As it was I was irritated that real life got in the way of my reading time and when I was busy doing other things I was constantly trying to find time to squeeze in just a couple more pages. The book wasn't quite perfect and there were a few points where I was a little confused but it gets the full five star rating for its pure addictiveness!

There is just so much to love about this world and particularly the characters. Jax is a mess, she's paranoid, suicidal and only one step away from a full on psychotic break but she's also a tough as nails survivor with a snarky sense of humour and a tendency to act before she thinks. She doesn't let people close easily but once she does she will fight to protect them and she's definitely the kind of person you want to have your back in a tough spot. Then we have Marsh (oh hello new book boyfriend!) who is just as as much of a smartarse as Jax and twice as messed up, he has a homicidal streak a mile wide but he has mad mind reading skills and the boy knows how to use his Theta waves! I love that he's not manipulative, he's pretty much a what you see is what you get kind of guy which means he'll tell you the truth even when you don't want to hear it. The romance between these two was pretty spot on, yes it starts happening very quickly but it never felt rushed and I loved every minute of it.

They're not the only great characters though and I also loved Dina for her sarcastic sense of humour, Doc for always being the peacemaker, Loras for his incredible act of bravery, Baby-Z for all round adorableness and adding so much humour to the story and Velith for being such a surprise. There are so many things to love about this story and the clever dialogue and interesting world building is only part of it. Grimspace has all the humour and action of Firefly, Jax is a space travelling, equally kickass version of Kate Daniels and the story will keep you gripped from beginning to end. I'm so glad I'm late discovering this series because that means I can devour all six books (and the spin off trilogy!) without having to wait between releases. Now I'm off to make a start on Wanderlust!