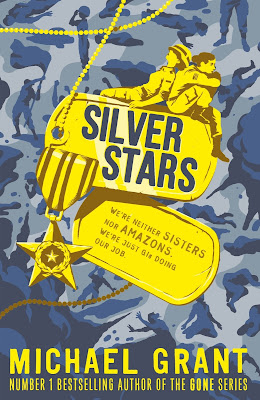 The second novel in the epic new young adult series that Michael Grant is calling his best yet!

It's WWII but not as you know it from school. This time the girls are on the Front Lines and not on the Home Front. Summer 1943. The enemy has been bloodied, but Nazi Germany is very far from beaten. Now the American army is moving on to their next target: the Italian island of Sicily.

With heavy memories of combat, the three young soldier girls – Rio, Frangie and Rainy – now know what they are willing to do to save themselves, and understand the consequences of those actions. On the front lines, they will again come face to face with the brutality of war until they win or die, while simultaneously fighting their own personal battles. No one will emerge unscathed.

In the tradition of The Book Thief, Code Name Verity and Between Shades of Gray, Front Lines gives the experience of WWII a new immediacy while playing with the ‘what ifs?’ of history.

Review:
If you thought Front Lines was good then you've honestly not seen anything yet because Silver Stars ups the stakes in every way possible, the danger is greater than ever and the characters have completely come into their own. If you're new to this series then I'd recommend reading the books in order but to give you a brief recap this is an alternative history of WWII imagining one major change - that female soldiers were recruited into the American army and served alongside the men on the front lines. Pretty much everything else is accurate to what really happened and these books are so well written and believable that you actually feel like you could be reading someone's personal diary as they tell you their own life story.

We continue to follow the stories of the three main characters introduced in the first book. First you have Rio Richlin who joined the army with her best friend Jenou after finding out her sister was killed in action. Then there is Frangie Marr who signed up as a medic mainly because her family needed the money, she faces even more prejudice than the others because not only is she a woman she's also black and racism was very prevalent during this time. The third main character is a young Jewish woman Rainy Schulterman who joined the army with the intention of shooting nazis but was quickly recruited into the intelligence community. Each girl has a separate story to tell but there are times when their stories link and I love getting to see the war through their very different experiences.

Rio has been fighting on the front lines for a long time now and she's rising up through the ranks because of her experience. She's become quite a ruthless fighter and has had to try and lock her emotions away but she feels a growing distance between her and her best friend and she's struggling to cope with everything that she's seen and done. As a medic Frangie is right there at the front too tending to wounded soldiers who wouldn't have much of a chance without immediate treatment. Her job definitely isn't a risk free one and she constantly finds herself facing danger while trying to protect others. Rainy has the most dangerous job of all though and is sent on an undercover mission to Italy, she has no backup and not much of a plan on how she's supposed to get herself home again so her story is fraught with danger and she suffers badly when she's captured along the way.

I have totally fallen in love with all three of these girls, I feel their pain and suffer alongside them and I'm desperately hoping they'll all make it through the war alive but we're constantly being shown how much danger they're facing and I'm worried that at least one of them won't survive it. I don't think I can praise this series highly enough, it's dark and can be quite painful at times but it's also totally addictive and utterly absorbing. Michael Grant has done a stellar job with these books, you can tell they're meticulously researched and they really are a must read.