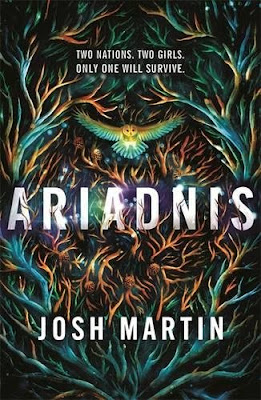 Back then I thought that if it weren't for that cliff, our cities would be one and there would be no need for all this fierceness toward each other. But then I learned about pride and tradition and prophecy, and those things are harder than rock.

Joomia and Aula are Chosen. They will never be normal. They can never be free.

On the last island on Erthe, Chosen Ones are destined to enter Ariadnis on the day they turn eighteen. There, they must undertake a mysterious and deadly challenge. For Joomia and Aula, this means competing against each other, to end the war that has seethed between their cities for nine generations.

As the day draws nearer, all thoughts are on the trial ahead. There's no space for friendship. No time for love. However much the girls might crave them.

But how you prepare for a task you know nothing certain about? Nothing, except that you must win, at whatever cost, or lose everything.

Review:
Most of planet Erthe was destroyed by a comet many years ago and only one island remains. On that island are two very different cities: Athenas, a city made of metal where they believe technology is the key to survival, and Metis where people have made their homes in giant trees and believe that nature is the most important thing and must be protected. Each of these cities has a Chosen One and according to prophecy they will alone can find a way to bring their people together. The Chosen Ones must complete a selection of challenges, only the best will survive and they will be the one who shows the people the way forward.

Aula and Joomia are the Chosen Ones, neither girl asked for the responsibility and they have both been treated differently their whole lives because of it. The girls only meet once a year, on their birthday, when they travel to Ariadnis, the place between their cities, to receive wisdom from the Chosen Ones who went before them, their trials are supposed to begin on their eighteenth birthday and that is when the prophecy will finally be proven. On the day of their seventeenth birthday the girls are told that they must find a way to unite before their trials start or both their cities will be doomed but with travel between the two cities banned that won't be an easy task.

I've found it really hard to write a review for Ariadnis, not because I didn't enjoy the book but because it's hard to know how much I can say without giving accidental spoilers. This isn't quite like anything else I've read before and it took me a bit of time to get used to the world and understand exactly how everything worked. I really enjoyed getting to know the characters though and I loved how different they were because of the way they were raised. Aula is from Metis and her mentor has focused her training on different types of technology, she is also incredibly strong and powerful so has spent a lot of time training for physical battle. Joomia is much quieter, in fact she is unable to speak and can only communicate with a very small number of people mind to mind. She doesn't have Aula's physical strength but she has a quiet wisdom and she is able to tell a great deal about the world around her by communicating with the trees they've made their home.

There are some great side characters and a lot of positive messages in the story about love and friendship. I loved that neither society is hung up on sexuality so it wasn't unusual for characters to date both boys and girls, there was no shame in characters having more than one sexual relationship and things were much freer and less pressured. Ariadnis is a slow build story, one that focuses on introducing both the world and the characters in the beginning but as you get further in the mystery deepens and you start to realise there are a lot of things going on that you weren't immediately aware of. Aula and Joomia are both thrown into some pretty impossible situations and it was really interesting to see how they coped with what happened to them. The way things unfolded at the end have left me desperate for the next book and I think Josh Martin is definitely going to be an author to watch out for!