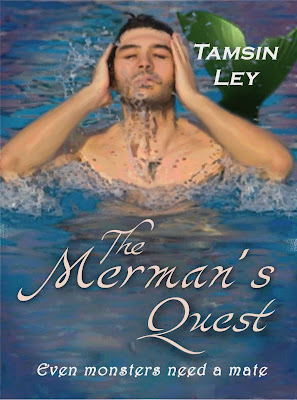 Find out how a sexy merman with a death-curse overcomes his fate in this Mates for Monsters short story.

Mates for Monsters Series:
The Merman's Kiss
The Merman's Quest (Free story for subscribing to the author's newsletter)

Review:
The Merman's Quest is a free short story you can get by signing up for Tamsin Ley's newsletter on her website. You can read the story if you've not read any of the author's books but personally I'd recommend reading it after The Merman's Kiss, especially if you were left with questions about Zantu's brother Rubac.

I'm glad that the author decided to give us some closure on Rubac's story, in the previous book his story left off with him being held captive and close to death thanks to his evil mate. I was a little disappointed that this story picks up a while later, his mate is dead (but we don't know how) and Rubac is trying to find a way to destroy his mate bond so that he doesn't die like she did. I think we could use a little more information on exactly how the mate bond works so that the stories make more sense but I was pleased to find out he'd escaped captivity.

I don't want to say too much about his plans to remove his mate bond but his quest brings him into contact with a marine biologist who is out on the ocean searching for a rare kind of dolphin. Things escalate very quickly between the pair and the story is a bit disjointed where there are big leaps in time trying to cover a reasonable length of time but both of those things are fairly understandable considering this is a short story. I liked the way things ended for the couple even if I did find their romance a little eyeball rolling worthy at times. The biggest disappointments were that we didn't get to spend much time in Rubac's underwater world and we didn't see any of his young child Ebby (who had been with him when he was taken prisoner!). This was explained in a brief sentence but I was really hoping for more than we got. I'm very glad we weren't left completely hanging though!

Source: Free short story received by signing up for the author's newsletter

Other Reviews:
If you have reviewed this book on your blog please leave a link to your review in the comments & I'll add the link here.
at 19:00