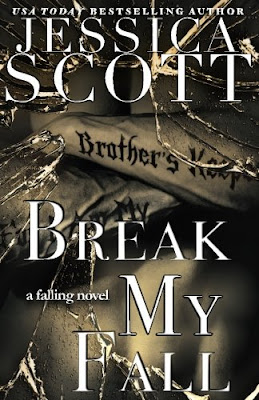 I’m addicted to it. It’s how I feel alive. It’s the only thing that’s real any more.

And now I have to sit around and discuss it like it’s physics or calculus. I can’t do it. I can’t pretend that it’s some sterile academic topic. Violence isn’t sterile. It isn’t calm. It’s pulsing. It’s alive.

Until I met Abby, I never wanted anything beyond the next fight. Never considered that I might finally find a way back to the land of the living.

Now? Now I find myself dreaming of a woman with golden eyes.

But I can never be with her. Because I am not whole. And I never will be again.

But I cannot stay away.

And loving her might finally be what breaks me.

Review:
Jessica Scott writes stories about soldiers who have returned from war and are trying to settle back into life at home. You can tell she writes from experience and she captures the struggles they face perfectly so it is very easy to get inside her characters head's and feel everything right alongside them.

Josh spent two tours abroad and he's come home broken, he's not coping with the stress and is drinking far too much which doesn't help his anger issues so he's often getting into bar fights. He's trying to settle into college but he feels so different to all the other students and his PTSD makes it hard for him to even get to his classes let alone stay focused once he's there. Abby has had her heart broken before and she's determined to put all her energy into getting through college and coming out with good grades. She doesn't really have time or energy for a relationship but she wants to help Josh deal with his issues. Abby makes Josh want to be a better man but can he put the past behind him, deal with his anger and move on with his life?

I loved both the main characters in this story. Josh has been through a lot and is seriously messed up but he wants to deal with his problems and he slowly learns how to open up with Abby and his fellow ex-soldiers. I like that the author doesn't use falling in love as an instant fix for everything, he wants to do right by Abby but he still makes mistakes and has to work at making better decisions with his life. Abby is great too, she's been through her own version of hell and it's made her a strong and independent woman. I loved the friendship between her and her best friend and the way she supported him through his own difficult break up.

I think my main issue with the story was that things started to move quite quickly between Josh and Abby. That wouldn't normally bother me but knowing Abby's history made me find it really hard to believe that she wouldn't be more wary of Josh, especially since the first couple of times she meets him it's obvious he's been in a fight. Someone with experience of domestic abuse is much more likely to be wary of a violent drunk so even though Josh never, ever raises a finger towards Abby or threatens her in any way I just think she'd be more aware of the violence inside him and I think it would frighten her more. I could have totally got on board their friendship developing over a longer period and I do love them as a couple but I wanted things to happen a bit slower. Like I said please don't worry that Josh is an abusive partner because he really, really isn't and I wouldn't have felt so concerned if it hadn't been for Abby's background. This is an issue that's a little personal for me so I'm probably more sensitive to it than most readers will be and I'm sure others wouldn't even notice what I did.

I'm really enjoying this series, I love Jessica Scott's writing and I'm looking forward to Eli's story. He's been a great side character in the previous two books as a friend and almost mentor to both Noah and Josh and I can't wait to get to know him better.