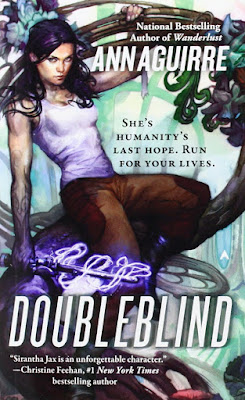 It's not easy to tread lightly wearing steel-toed boots.

Sirantha Jax isn't known for diplomatic finesse. As a "jumper" who navigates ships through grimspace, she's used to kicking ass first and taking names later - much later. She's not exactly the obvious choice to sell the Conglomerate to the Ithtorians, a people whose opinions of humans are as hard as their exoskeletons.

And Ithtorian council meetings aren't the only place where Ambassador Jax needs to manoeuvre carefully. Her lover is frozen in permanent kill mode, and his hair trigger threatens to sabotage the talks - not to mention their relationship.

But Jax won't give up on the man or the mission. With the Outskirts beleaguered by raiders, pirates and flesh-eating aliens, an alliance with the Ithtorians may be humanity's only hope. Which has Jax wondering why a notorious troublemaker like her was given the job . . .

Review:
Doublebind is quite different to the previous books in the series, there's less action and more politics as Jax and her crew have finally arrived on Ithiss-Tor and she has to put her diplomatic skills to the test. We all know Jax as someone who speaks first and thinks later but she has to completely put her impulsive nature to one side and make nice with the locals if she wants any chance of building an alliance between humans and the Ithtorians. Although some of the Ithtorians are open to the alliance and hoping to profit from new potential trade routes the old guard is dead set against having anything to do with beings as primitive as humans.

In some ways I really like the new side we see to Jax here, I like the fact that she isn't just out for herself like she used to be and I appreciated that she was trying her best to make the alliance work but I have to admit she's more fun when she's being her impulsive normal self and you can't tell what she'll do next. Luckily we see a bit more of that side of her towards the end of the book and it led to a very interesting adventure. I enjoyed learning more about the Ithtorian culture but I think certain things could have been expanded upon. One thing I definitely missed was seeing more of the crew. Jael, Dina, Hit and Doc all have fairly minor appearances but they're fairly absent for much of the story and I missed the usual camaraderie we see between them.

March is like a completely different man to the person we met in the first book, events in Wanderlust have changed him and it's not a change for the better. I spent much of the book wondering why I fell in love with him in the first place and hoping that things wouldn't be dragged out for too long but luckily Jax finds a very clever way to make a breakthrough and that was one of my favourite moments in the story. The character who is on top form throughout is Vel, he's been a favourite of mine for a while now but this book just made me love him even more. I adore the friendship between him and Jax, he always has her back even though they're on his homeworld and he's going against cultural norms.

There was a certain event that completely shocked me and kind of broke my heart a little. I don't want to say too much but I was gutted by the way one character behaved, especially because of the reasoning behind their actions. I really hope that they are given the chance to redeem themselves in the future but it's not going to be easy to trust them again. Things are getting very tense in the outside world too as the Syndicate do their best to undermine the Conglomerate and I think it's going to be interesting how the Conglomerate deals with this and other threats. I'm definitely looking forward to picking up Killbox to see how Jax and her crew deal with the aftermath of this mission.