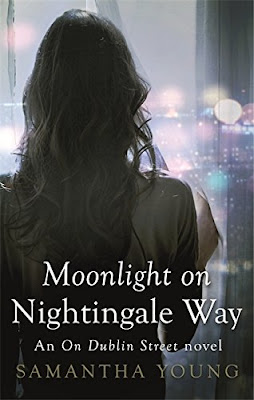 Logan from Echoes of Scotland Street is back with his own smouldering story, as the bestselling On Dublin Street series returns...

Logan spent two years paying for the mistakes he made. Now, he's ready to start over. He has a great apartment, a good job, and plenty of women to distract him from his past. And one woman who is driving him to distraction...

Grace escaped her manipulative family by moving to a new city. Her new life, made to suit her own needs, is almost perfect. All she needs to do is find her Mr. Right-or at least figure out a way to ignore her irresistible yet annoying womanizer of a neighbor.

Grace is determined to have nothing to do with Logan until a life-changing surprise slowly begins turning the wild heartbreaker into exactly the kind of strong, stable man she's been searching for. Only just when she begins to give into his charms, her own messy past threatens to derail everything they've worked to build...

Review:
Moonlight on Nightingale Way is the last full length novel in the On Dublin Street series and as much as I've loved these books I can't help thinking that's probably for the best because the stories have started to feel a little forced now. I was actually looking forward to reading Logan's book, we met him in Echoes of Scotland Street (he's Shannon's brother so we've already seen exactly what he was prepared to sacrifice to protect his sister!) and I really wanted to see him get his own happy ending after everything he's been through.

Logan is trying to put his life back together after being released from prison, he has a steady job and he's making up for lost time when it comes to women working his way through a string of one night stands but he refuses to let anyone close to him. Grace escaped from her emotionally manipulative family and has built a new life for herself in Edinburgh. She's happy with her career but is still looking for Mr Right. Grace and Logan are neighbours whose relationship doesn't get off to the best start when he's constantly disturbing her with his very loud bedroom antics but in spite of their instant dislike there is also some pretty intense chemistry between them. They're thrown together when Logan makes a shocking discovery and Grace happens to be there to witness it, she goes out of her way to help Logan deal with his new situation and as they spend more time together they start to realise that assumptions they'd previously made about each other might not be quite so accurate.

I have to confess I was a little disappointed in the romance between these two, they're both great characters so it had the potential to be great but there was so much drama between them and we spent too long watching Logan sleeping around with other women. I don't mind that he had a past but I'm not interested in listening in on the hero when he's in bed with other women and I didn't like the way he threw it in Grace's face, it wasn't that he was cheating on her as they weren't in a relationship or even friends at the time but he was quite disrespectful to her as a neighbour and it made me wonder why she'd ever be interested in him as a potential partner. There were a few times when he pushed her away for ridiculous reasons too and I just got bored of them circling around each other when it was so obvious they both wanted to be together.

I think my main issue with the later books in this series is how Samantha Young is so determined to mention every single previous couple that she creates events just to be able to shoehorn them in. I actually love it when contemporary romance series allow us to revisit previous couples but when a series is this long you don't need to bring in ALL of the previous characters or it just becomes an overwhelming list of characters, I can't keep track of who everyone is and I honestly don't care that they all have 300 children and this is their names and ages. It makes sense in this case to have Shannon and Cole on the scene because she's Logan's sister, you could even bring in Jo and Cam because they're Cole's family but when you go beyond that you just bog down your story with name dropping and short change the couple you're supposed to be focused on. Even the epilogue gives us a final wrap up for all previous couples and yes I understand that this was supposed to be the last book in the series (although we know there have since been a couple of novellas!) but I think it would have been better to post that separately, perhaps as deleted scenes on the author's website.

Overall I think Moonlight on Nightingale Way could have been a lot stronger than it was, I think its probably a good thing that the author decided to end things here because I doubt I'd have continued beyond this point anyway.