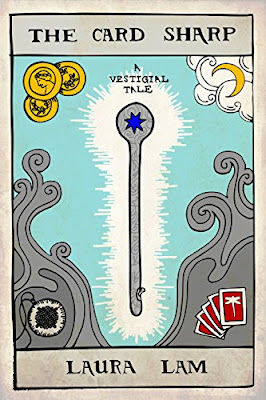 “He always mourned that moment, when the high began to fade. It was like he moved from who he wanted to be to having to face the reality of who he was. He’d rather feel supernatural. More than Drystan Hornbeam, a seventeen-year-old-boy who had made a lot of foolish mistakes and didn’t seem to be changing his habits anytime soon.”

Before Drystan became the White Clown of R.H. Ragona’s Circus of Magic, he was a Lerium addict struggling on the streets of Imachara. When a mysterious woman gives him a chance at a new life, he takes it, even if it means falling even deeper into the dark underbelly of the capital of Ellada. Drystan knows that selling Lerium to the powerful men and women who bet at the high stakes card tables is perilous, especially when he still battles his own addictions. Yet when he meets a man who can help him learn to cheat at cards and swindle them out of enough money to start a new life, he dives headfirst into more danger.

Review:
The Card Sharp is the fourth of Laura Lam's Vestigial Tales set in the world of her Micha Grey series. Its technically a prequel as it shows events from before Pantomime but because it features a character not introduced to the series until Shadowplay I think you're better off reading it after that book when it will have more meaning to you.

This is the second chance we've had to delve into Drystan's past but this takes us back to events before The Snake Charm and before Drystan ever became the white clown in Ragona's Circus of Magic. The story starts not long after Drystan ran away from home and takes us through his struggles with his lerium addiction and how his life hit rock bottom. It isn't pretty reading but it does end on a more hopeful note as Drystan works hard to escape the life he fell into and move on with his life.

Obviously if you've read any of the main books in the series you'll already know where life takes him beyond this point but I enjoyed seeing more of his background and learning how he first met Maske. I wouldn't recommend this as a starting point but it's a great addition for fans of the series who want to know more about Drystan.