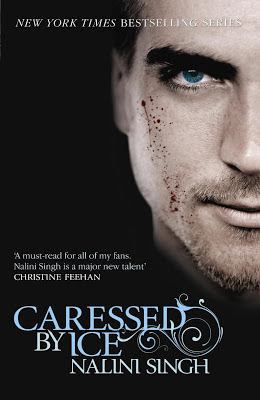 As an Arrow, an elite soldier in the Psy Council ranks, Judd Lauren was forced to do terrible things in the name of his people. Now a defector, his dark abilities have made him the most deadly of assassins - cold, pitiless, unfeeling. Until he meets Brenna . . .

Brenna Shane Kincaid was an innocent before she was abducted - and had her mind violated - by a serial killer. Her sense of evil runs so deep she fears she could become a killer herself. Then the first dead body is found, victim of a familiar madness. Judd is her only hope, yet her sensual changeling side rebels against the inhuman chill of his personality, even as desire explodes between them. Shocking and raw, their passion is a danger that threatens not only their hearts, but their very lives.

Review:
Ever since she was captured and tortured by a Psy psychopath Brenna has been struggling to put the pieces of her life back together. She may have been a victim but it takes strength to get through everything she did and come out sane on the other side. Something deep inside her has changed though and she is terrified of the new abilities she has gained, fearing that she is turning into something as evil as the Psy who held her prisoner. Visions of violence and death haunt her and when one of her pack members is brutally murdered in the same way as her dream Brenna is terrified. The only person she can turn to is Judd, he is the only one she trusts to be honest with her and who might be able to help her uncover what is happening.

Judd is an incredibly powerful Psy, one with rare abilities that make him a perfect assassin. Before he fled the Psy-Net to protect his family he was an Arrow, an elite soldier who carried out the Council's orders, no matter how terrible the things they asked of him. Now he uses his abilities to work against the Council, determined to stop them from taking Silence to the next level. The nature of his abilities make Judd an extremely powerful soldier but they also mean he is at the greatest risk of injuring someone if his emotions get the better of him. Judd is one of the Psy who embraces the Silence because he knows it will keep the people he cares about safe from his abilities. He doesn't want to break the chains and allow his emotions to the surface because he thinks he will end up hurting someone so as much as he is drawn to Brenna he is determined to keep her at arms length. Brenna isn't going to give up on him without a fight though, she knows what she wants and she will do whatever it takes to show Judd how good things could be between them.

Caressed by Ice was my favourite instalment of the series so far and there is no doubt that Judd was my favourite hero! He comes across as so cold and controlled but you just know there is so much more to him bubbling away under the surface. When he makes up his mind to go for it with Brenna there is no stopping him and he is incredibly passionate and possessive when he allows his emotions to show. I loved watching Brenna break through his icy outer layer to free the man underneath. Brenna and Judd are a fantastic couple who take time to get to know each other before they fall in love. It is harder for them to find a balance than it was for the previous couples because of the nature of Judd's abilities and the way they effect him when his emotions start to show. It isn't easy for Judd to break the hold that the Silence has on him and let Brenna under his defences. What I really liked was the way Brenna sees through the iceman act in a way that nobody else does, the other wolves have never fully accepted him as part of their pack and Judd has always deliberately kept himself at a distance from everyone else. As Judd opens up to Brenna he also starts to get to know the rest of the pack and finally begins to find his place amongst them.

Brenna has suffered so much but she refuses to break and let the man who tortured her win. She loves her pack and they brought her back from the edge but she refuses to let them keep her locked away even though they are just trying to keep her safe. I loved the relationship she has with her brothers and the SnowDancer alpha Hawke (I can't wait for his book!). Her brothers are understandably protective of her but they have started to smother her and I was glad that Hawke helped her get her freedom back. It was great to get to know more about the wolves and see the differences between their pack and the DarkRiver leopards. We are at the point in the series where we are starting to see more of the wider picture and learn about the other kinds of changelings and how the different packs all interact with each other. We are also uncovering more about just how twisted the Psy Council are and the lengths they are prepared to go to to get what they want. This series is becoming a firm favourite and I highly recommend it to paranormal romance fans.

Other Reviews:
Tynga's Reviews
If you have reviewed this book on your blog please leave a link to your review in the comments & I'll add the link here.