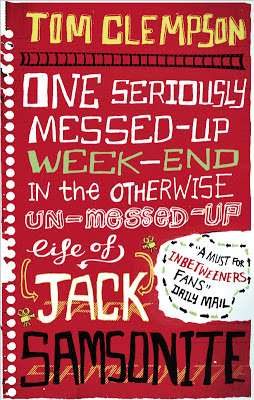 Jack Samsonite's fool-proof plan for being amazing at everything (including getting a life, getting into film school, and getting into a girl's knickers)

1. Film a mind blowing, awesome so bad it's good short film about zombies superheroes three idiot friends, which must also include great depth and meaning me kissing a girl on the mouth.

Review:
Two years on from the ending of One Seriously Messed-Up Week in the Otherwise Mundane & Uneventful Life of Jack Samsonite (OSMUW for short) and our hero Jack is just trying to get through his last year of college, finish his short film for his final project, decide on a university course, oh, and find a girl to kiss! You might not think that sounds too difficult but if you read the first book then I'm sure you'll have some idea just how wrong you'd be. Jack has a unique ability to get himself in trouble, no matter how innocent his intentions are in any situation things always seem to end up getting turned around so that it looks like he's up to no good. And so help him on the occasions when he really is up to no good because he is just bound to get caught!

If you enjoyed OSMUW then you're going to love One Seriously Messed-Up Weekend in the Otherwise Un-Messed-Up Life of Jack Samsonite (OSMUW2 for short) just as much. Tom Clempson has infused this story with the same brand of humour and crazy antics as the first book and it is guaranteed to have you snorting with laughter (I have been known to embarrass myself in public while reading these books). This series definitely has a modern Adrian Mole feel to it and is just so much fun to read that you don't want the books to end. I think one of the things that made me laugh the most was the tribe of pygmy warriors - otherwise known as the tiny year seven students who were evil little monsters.

I don't want to say much more about the story, not because I don't have anything to say but because I don't want to spoil anyone's fun before they get to read it for themselves. What I will say is that I think everyone should give this series a try. If you ever wanted to know what goes on in a teenage boy's head then OSMUW2 will give you a pretty good idea. These books will appeal to both teens and adults - as long as you have a sense of humour and don't mind a hero who swears like a trooper you're going to love Jack Samsonite. I don't know if Tom Clempson has more books planned for this series but if he does they'll be jumping straight to the top of my wish list!