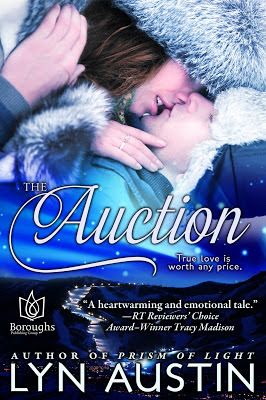 Katherine Blake wants a baby. At thirty-three, she has a home and an antique business that she loves, but she is running out of time. Kat hasn’t had a man in her life that she would even consider fathering her child…except her ex-husband.

Michael Blake is for sale. In support of special-needs children, he offers himself up for one week as a prize at a New Year’s Eve local celebrity bachelor auction. The result? His ex-wife buys him to finish the restoration of the hundred-year-old home they bought shortly after their marriage. Or so he thinks. Katherine does expect the remodelling to be finished, but the rest of her plan is more devious. She doesn’t need him to rekindle the one-of-a-kind love that led to their fairy-tale wedding and he doesn't have to atone for the mistakes that led to their divorce, but he does have to...well, deliver.

Review:
Kat has a successful business and a home that she loves but what she always wanted more than anything is a family and she feels like her chances are slipping away from her. There is only one man that she can imagine as the father of her baby and that is her ex-husband Michael. Their relationship ended due to lack of communication and because they let other priorities get in the way but even though she could never trust him with her heart again she knows he would be a wonderful father. When Michael offers a week of his time as a prize at a charity auction Kat is determined she will be the one who gets to take him home. Her excuse is that she wants him to finish the renovations on her home but she also has other plans for him, ones that could get her everything she ever wanted if she's careful.

The Auction is a sweet contemporary romance that is all about second chances and learning from past mistakes to discover what is really important. I'll admit that I had my reservations about Kat in the beginning, I was really unhappy at her plans to trick Michael into getting her pregnant - especially when she had no intention of ever telling him about the baby. I think that kind of thing is unforgivable and I found myself getting more and more annoyed at her the longer she stayed determined to follow through on her plans. Thankfully it didn't take her too long to come to her senses and realise that she could never do that to Michael. She realised that he deserved better and as her feelings for him started to flood back she decided that trying to rebuild their relationship was more important to her. Once she got over her initial selfish attitude I found myself liking Kat a lot more and it didn't take long before I was rooting for her and Michael to work things out.

Michael was a fantastic hero, he had lost sight of their relationship when he was trying to open his ski lodge but everything he did was to build a successful future for them. He was heart broken when Kat kicked him out not realising how neglected she felt and that she thought he didn't love her any more. If only they would have been more open with each other they could have avoided a lot of heartache but they have learnt from their mistakes and are both even more determined to make things work from now onwards. Michael was so sweet and romantic that he made my heart melt, any woman would be lucky to end up with a guy like him. He is caring, protective and passionate and the chemistry between him and Kat was fabulous.

Kat's grandfather adds a nice extra element to the story with his crazy antics and womanising ways. Fans of contemporary romance are sure to enjoy The Auction and I'll be interested to see what author Lyn Austin comes up with next.

Source: Received from Book Monster Promotions in exchange for an honest review 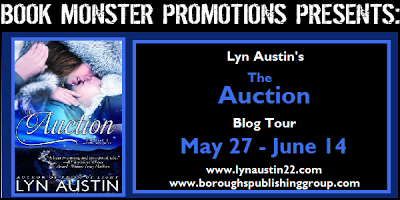 As part of the blog tour Borough's Publishing Group is offering Lyn Austin's Lunchbox Romance, Carol of the Heart along with a 5-story Lunchbox Romance subscription. You can enter the giveaway using the rafflecopter widget below. The winner will be contacted directly by the publisher to arrange the prizes.