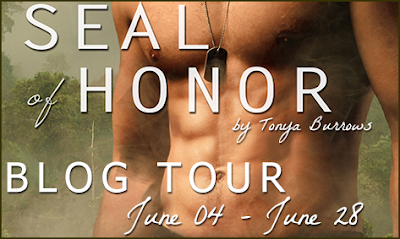 I'm thrilled to welcome Tonya Burrows to the blog today to celebrate the release of her debut novel SEAL of Honor. This is the first book in her romantic suspense series based on a team of ex-military guys who are now working in the private sector as hostage rescue experts. I'm going to admit the main thing that drew me to this book was the cover (come on girls who can resist abs like that?) but I'm happy to say that Gabe more than lived up to his cover image and Audrey was a fantastic heroine too. I'll be posting my full review later today but if you're a fan of military romances or romantic suspense you're not going to want to miss this one! 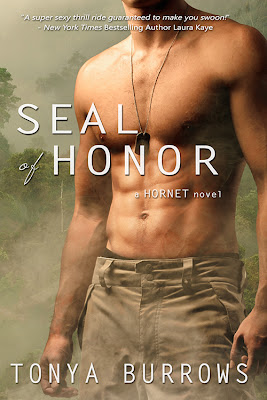 It’s a good thing Gabe Bristow lives and breathes the Navy SEAL credo, “the only easy day was yesterday,” because today, his life is unrecognizable. When his prestigious career comes to a crashing halt, he’s left with a bum leg and few prospects for employment that don’t include a desk.

That is, until he’s offered the chance to command a private hostage rescue team and free a wealthy American businessman from Colombian paramilitary rebels. It seems like a good deal—until he meets his new team: a drunk Cajun linguist, a boy-genius CIA threat analyst, an FBI negotiator with mob ties, a cowboy medic, and an EOD expert as volatile as the bombs he defuses. Oh, and who could forget the sexy, frustratingly impulsive Audrey Van Amee? She’s determined to help rescue her brother—or drive Gabe crazy. Whichever comes first.

As the death toll rises, Gabe’s team of delinquents must figure out how to work together long enough to save the day. Or, at least, not get themselves killed. Because Gabe’s finally found something worth living for, and God help him if he can’t bring her brother back alive.

HORNET Series:
SEAL of Honor
Titles and release dates of future books in the series to be confirmed 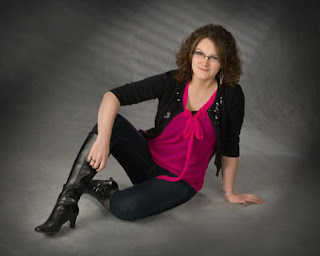 Author Bio:
Tonya Burrows | Writing has always been my one true love. I wrote my first novel-length story in 8th grade and haven't stopped since. I received a B.A. in creative writing from SUNY Oswego and I'm now working on a MFA in popular fiction at Seton Hill University.

When I'm not writing, I spend my time reading, painting (badly), exploring new places, and enjoying time with my family. Give me a good horror movie over a chick flick any day. (And, let's be honest, I'll take a bad horror movie too!) I'm a geek at heart and pledge my avid TV fandom to Supernatural and Doctor Who. I'm also a big fan of The Voice. What can I say? Guilty pleasure.

I share my life with two dogs and a ginormous cat. We live in a small town in PA, but I suffer from a bad case of wanderlust and usually end up moving someplace new every few years. Luckily, my animals are all excellent travel buddies.

Now please give a warm welcome to Tonya Burrows as she talks about where she gets inspiration for her characters and shares some of her favourite amusing quotes from SEAL of Honor.

As an author, I’m always asked questions about how I do what I do. One of the questions I get the most is “where do your characters come from?” I never quite know how to answer that, but I’m going to try today.

So, the short answer? Dunno.

Hah, told you I have a hard time answering that question.

Since I don’t understand how I do what I do any more than the next person, my characters often surprise me. I don’t consider myself particularly funny, but man, my characters say some hilarious things. It’s one of the things I love most about writing, so I thought it would be fun to share some of my favorite funny quotes from SEAL OF HONOR with you all.

In this first quote, Harvard and Jean-Luc are out in the jungles of Colombia, the middle of guerilla country, when they find two abandoned vehicles. Their exchange made me giggle-snort when I wrote it and had the other patrons of my favorite coffee shop eyeing me warily.


Harvard was out the door before Jean-Luc could stop him. He moved smoothly, kept his rifle at the ready, and cleared both vehicles, all quick, efficient, and quiet-like.
Maybe, Jean-Luc thought as he followed, they had all underestimated genius boy’s abilities. “Where did you learn to do that?”
“Call of Duty.”
Or maybe not.

In this next one, Gabe discovers some members of his team are not all that willing to accept orders:


“Bite me,” Ian said.
Oh, yeah. This was going to be fun. “Do I look like a fucking vampire, Reinhardt? And if you have a problem with my leadership…” Gabe turned, walked to a closet at the front of the plane, grabbed one of the parachutes he’d asked Quinn to pack, and tossed it to Ian. “Strap in. The door’s right there. Go find yourself a new job.”

Audrey, the heroine of SEAL OF HONOR, was always good for a laugh. She was never about to let poor Gabe have the last word, as proven by these next two quotes.


Gabe turned to Audrey. “Could you shoot a firearm and not hit me if the situation came down to that?
“I was born and raised in the South, honey, but I’m no southern belle. I shoot what I aim at,” she said in a tone so coated with sugar he was surprised her teeth didn’t rot. Then she flashed a smile as bright as that sinful yellow tank top she wore. “But it’s still up in the air whether I’ll aim at you or not.”


Scowling, fuming, he found clothes in the top drawer and yanked on stiff, brand new jeans in too dark a wash for his taste, forgoing both underwear and the soft red T-shirt.
“Uh, Gabe, maybe you should shower before—”
He sent a snarling, lethal glare over his shoulder that had quelled many a budding SEAL. But not Audrey. Her chin just hitched up in challenge.
“Well, sorry, but you look and smell like a caveman.” Planting a fist on one jutted hip, she glared right back at him. “But that doesn’t mean you get to act like one, too.”

And finally, even super-serious Quinn managed to get a few good shots in when the team got out of hand.


Quinn stood up fast, letting his chair clatter to the floor. “Tenhut!”
It would have been amusing to watch the former soldiers in the group snap to automatic attention if he wasn’t so pissed. Once a soldier, always a soldier.
Marcus, the fucking fed, just crossed his arms and scowled. “You military dudes really say that?”
“Yeah. Really. And if you guys have enough energy to bitch at each other like a bunch of nagging housewives, you have enough for some PT training. On the deck. Now!”

So let me return to my original question. Where do my characters come from? The thing is, I have all these characters floating around inside my head and every once in a while, one steps forward and says, “write my story.” And so I do. I honestly don’t know where they come from—for the most part, I don’t base them on myself or people I know. They’re just there and have always been there, simply another part of me, as essential to me as my heart and lungs. And I hope they never leave, because then who would make me giggle-snort in the coffee shop?

Big thanks to Feeling Fictional for having me here today!

Thanks for a fabulous guest post Tonya, you included some of my favourite quotes from the book. I loved the fact that Audrey wasn't the kind of heroine who was going to sit around and wait for a man to come and rescue her, she is determined to find her brother even when she can't find anyone willing to help her and as much as Gabe protects her at times she also protects him right back. I loved the banter between the guys in HORNET and I'm looking forward to spending more time with them all as the series continues.

So do you like the sound of SEAL of Honor? Have you already read it or will it be going on your wish list? Which is your favourite quote?
at 09:00