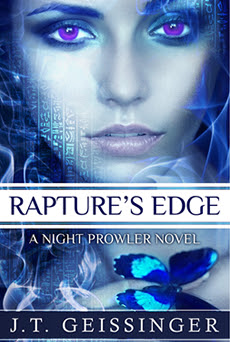 SECRETS . . . In the hidden world that exists beside our own, a mirror world of ancient magic and elegant deceptions, a world of people who are so much more than they first appear, a war is brewing. Most of these Gifted people—the Ikati, a savage, sensual race of lethal predators—are content to hide behind human smiles, disguising their splendor in order to survive. But others are discontent. And they will hide no longer.

BETRAYALS . . . Eliana lives for two things only: vengeance on the man who killed her father, and seeing his dream of living in the open with humans come to pass. But that dream is far too dangerous for The Hunt, a group of elite Ikati assassins with one objective: eliminate her before she can expose their secrets to the world.

SEDUCTION . . . Demetrius is haunted by the memory of the woman he once loved. He will risk everything to save her from the killers on her tail…and convince her, before the ancient walls between two worlds crumble, that only together can they defeat their real enemy, a brilliant, cunning traitor far more deadly than either of them can guess.

Review:
Eliana was on the verge of falling in love with Demetrius until the day she found him standing over her father's dead body holding a gun and fled her colony in Rome with a small group of followers before he could come after her too. They have spent the last 3 years hiding in the catacombs in Paris and Eliana has been forced to take extreme measures to make sure they have enough money not just to survive but also to plot their revenge. What she doesn't realise is that Demetrius is innocent, he wasn't the one who killed her father and the betrayal actually came from much closer to home. In fact nothing is what she thought it was, her father wasn't the kind and benevolent king she knew him as and her enemies actually followed her to Paris. Demetrius has been looking for Eliana ever since she disappears but when he finally tracks her down will he be able to convince her of his innocence and help her uncover what is really going on within her group? Can Eliana put the pain from the past to one side long enough to actually listen to him?

I have been a huge fan of this series from the first book and I'm happy to confirm that the books just get better and better with every instalment. I have it on good authority from a friend of mine that this book can be read even if you haven't read the previous books but I would still personally recommend reading the series in order. Although each book focuses on a different couple there is a complex ongoing plot that threads throughout all of the stories and I think you will get more out of it if you read the books in the order they were written. This is a fantastic series though and one I'd highly recommend to anyone who likes their paranormal romance fast paced, packed with action and full of fabulous characters. Rapture's Edge is set 3 years on from the end of Edge of Oblivion and picks up the story of members of the newly discovered Rome colony of Ikati, we met these characters in the previous book and I have been looking forward to getting to know Eliana and Demetrius ever since.

This is one of those books that is very hard to put down once you've started it, we see things from both Eliana and Demetrius's points of view with the occasional chapter from Jenna's perspective (Jenna was the heroine from Shadow's Edge and anyone who has read that book will understand why her POV is so important). I love romances that are told from dual POVs, it really allows you to get inside both main character's heads and these are the kind of characters you want to spend time with. Eliana has been betrayed at every turn but she doesn't allow that to make her bitter, she has always fought to do the best for her people and no matter how much she has hated things she has been forced into she puts their needs above her own. When she does start to uncover what is really going on she is brave enough to stand up for herself and those she cares about, she isn't the kind of woman who is going to sit around and wait to be rescued - she would much rather use her abilities to protect herself. As a full blooded Ikati from a line of kings she is incredibly powerful but she has also worked hard to train as a fighter and she certainly knows how to use her abilities to her advantage in a fight.

Demetrius is a fantastic hero, he is honourable and brave and he loves Eliana deeply. He wasn't the one who killed her father but he refuses to betray the person who did it because he is sworn to protect them and they did it in self defence. Even though telling Eliana the truth would make it easier for her to forgive him he stands his ground and begs her to trust him. After what she witnessed trust doesn't come easy to her but the more time she spends with Demetrius and the more information she uncovers about her companions the more the things he has told her start to make sense. She pushed aside her love for him when she thought he was a murderer but being around him makes it impossible to resist the attraction she feels, especially when she starts to believe he may not have been plotting behind her back after all.

I don't want to say too much about the story because I'd hate to give spoilers so I'm just going to say I think it was the most action packed instalment of the series so far, there are fights, robberies, explosives, chases, bad guys who will make your skin crawl, funny moments, sexy moments and some really heart melting confessions of love that will make you swoon for Demetrius. I can't even begin to tell you how much I enjoyed Rapture's Edge and I can't wait to get my hands on Edge of Darkness when it is published later this year. J.T. Geissinger is proving herself a force to be reckoned with in the paranormal romance genre and I'm sure we're going to be seeing lots more of her in the future.

Source: Received from publisher in exchange for an honest review