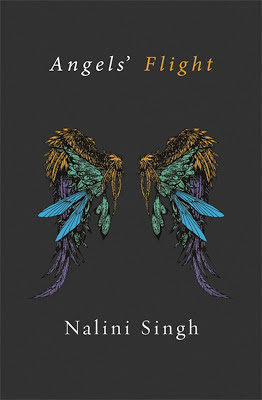 Angels' Pawn is a tale of flirtation and danger set in the Guild Hunter world. Ashwini and Janvier have no reason to be drawn to each other - but they are. Will the spark between them be fanned to become a flame . . . or are they both the pawns of angels?

In Angels' Judgment Sara and Deacon are Guild Hunters; their life's work is catching and capturing - or killing - rogue angels. They have to make life or death decisions in a moment, but when judgment comes, should love be allowed to get in the way . . . ?

In Angel's Wolf Noel may have been promoted, but in the Guild Hunter world that's not always as positive as it sounds. And now that he's working with the beautiful, dangerous, seductive Nimra there are a whole host of new risks he has to contend with . . .

And in the never-before-published Angels' Dance read the compelling story of Jessamy, a beautiful flightless angel who has always held her own in the world of angels and archangels . . . until she meets Galen, and begins to dream of flying . . .

Review:
Angel's Flight is an anthology containing four novellas set in the Guild Hunter world, each features a different couple and is set at a different point in the series timeline. Angels' Dance, Angels' Judgment and Angels' Pawn are all set before the first book in the series (Angel's Blood) while Angel's Wolf is set between Archangel's Consort and Archangel's Blade. Although I think you could probably get away with reading these stories before the rest of the series I'd actually recommend waiting until you've read at least as far as book 3 just so that you are already familiar with the different characters who star in the novellas. I'm going to talk about each of the stories separately in this review but I would say this book is well worth picking up if you're a fan of the series. I love the world that Nalini Singh has created and it was so much fun to get to know some of the side characters a bit better.

Angels' Pawn:
If you have read any of the other books you'll probably remember talk of guild hunter Ashwini and her vampire nemesis. Janvier has a very bad habit of getting himself in trouble with the angels and doing a disappearing act which means the guild are called in to track him down. Ash has spent years chasing him across the world and through the bayou only for him to always make his peace with the angel who hired her just before she catches him. For once Ash's job isn't to search for Janvier though and this time she actually needs his help, she has been asked to find a kidnapped vampire but the last thing she wants is to be caught up in the politics between two of the vampires who report to the angel Nazarach. Since Janvier is familiar with all of the vampires involved she is hoping he can smooth the way and help her through the situation in one piece.

Angel's Pawn is the shortest of the novellas included in this book and it is also the only one where we don't get to see a full on relationship develop between the two main characters. In spite of that it was a really enjoyable read and I absolutely loved the banter between Ash and Janvier. they have great chemistry and I have high hopes for them hooking up at some point as the series progresses - there is no way they can deny their connection forever! Ash has always been on the sidelines (although she does have a larger role in the 4th book Archangel's Blade) so we don't know a huge amount about her but she has some very interesting abilities that I'm looking forward to learning more about in future books. I don't remember actually being introduced to Janvier in the earlier books, he was mentioned but I don't think we ever saw him, so it was great to get a taste of his character too. He is one sexy Cajun with a real playboy attitude but he seems to have met his match in Ash and it looks like he's more than willing to explore their attraction.

Angels' Judgment:
I have liked Elena's best friend Sara from the moment we first met her in Angel's Blood. As the guild director she has always gone out on a limb for her people and she is particularly protective of Elena even when that does mean facing off against a pissed off archangel. Sara and weapon expert Deacon are such a cute couple and I've always enjoyed seeing Elena spend time with them but it was fantastic to actually discover how they met each other and became a couple.

This story has a nice amount of action as Sara and Deacon work together to track down a rogue hunter who has started murdering vampires. Sara is also facing trials thrown at her by the archangels because she is about to become the new guild director and the odds are not in her favour. The chemistry between Deacon and Sara is fantastic, they have trouble keeping their hands off each other but their worlds are far apart and they both have reservations about how a relationship between them would work. Sara worries that Deacon wouldn't want to have her as his boss when she becomes director and Deacon prefers a quiet life away from the spotlight which is something the director will never be able to have. I just love this couple and it was great to have a story which focuses on them, I hope we get to see more slices of their life together further down the line.

Angel's Wolf:
I'll admit that this was the story I was least excited about reading because I couldn't remember who Noel was and I don't remember coming across Nimra before. If you're like me and need a reminder Noel was the vampire who was horrifically tortured during Archangel's Consort before being dumped in Raphael's territory as a warning. His physical recovery was a long and slow process but even though he is fully healed he still has the mental scars from his experience. Noel was always one of Raphael's most trusted vampires, not far below the seven in terms of the hierarchy, but now he has been sent to the court of the angel Nimra. Noel has been told it is a promotion but he thinks he has been sidelined because of what happened to him. In fact it is quite the opposite, Nimra has reason to believe that a member of her court, someone who is very close to her, is plotting against her and she needs an outsider's help to uncover who is behind the attempt on her life.

I still don't remember coming across Nimra before, she is a very old angel and one who is feared by even the most powerful angels and vampires. She has no trouble holding even Nazarach out of her territory and we all know what kind of reputation he has! Nimra is nothing like Noel expects her to be, there is none of the terror and fear that he would expect in her court and the people who stay there all seem to genuinely care for her. It was surprising how human Nimra seems considering she is so old and powerful, she shows affection for her people and for animals (you've got to love an angel who cares about her cats!) and seems like a decent leader. It was hard to figure out why her enemies were so terrified of her at first but before long you realise that she has more than enough power to hold her own if she needs to. I enjoyed the way her relationship develops with Noel, she helps bring him back from the knife edge that his torture left him on and gives him a reason to live again. They make a really cute couple and I hope we catch up with them further down the line.

Angels' Dance:
This was hands down my favourite novella in the book and I absolutely loved Jessamy and Galen's story. Jessamy was born with a deformed wing and in spite of the best efforts of the healers she has never been able to fly, she longs to feel the wind on her face and for the rush of flying but when someone takes her it just brings home the fact that she will never be free to fly whenever she wants to so she has refused to fly with anyone since she was a child. Jessamy has contented herself with keeping the angelic histories and with teaching the young angels but she leads a fairly solitary life apart from the time spent with the children. She has never even left the refuge to visit any of the places she writes about in the histories.

We know Galen as one of Raphael's seven but this story is set long before the first book in the series and shows Galen's transfer to Raphael's territory as the new weapons master. From the minute he sees Jessamy he knows he wants her and he will do whatever it takes to convince her to take a chance on him. Their romance was so sweet and they make an absolutely adorable couple. I loved the way Galen was so patient with Jessamy and how he works so hard to woo her but what I love most about him is that he puts his jealousy to one side to ensure that Jessamy makes the decision to be with him for the right reasons. I've always liked Jessamy's character, it can't be easy to be the only angel who is unable to fly and it has had a huge effect on her confidence. She has always believed that nobody would be interested in her so she pushes people away before they have the chance to hurt her but Galen shows her how good things could be if she would just let him in. This story left me with a huge smile on my face and I don't think it could have got any better!

You can also purchase Angels' Pawn and Angels' Dance separately as ebook novellas: