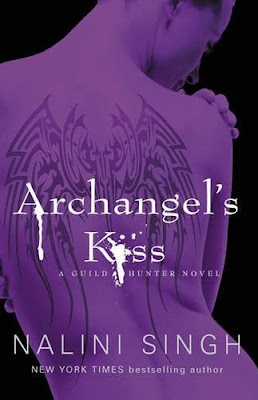 Elena Deveraux is a Guild Hunter. She was hired to do the impossible - to hunt down a rogue Archangel - and she succeeded where none had believed she could. But in the process, she fell in love. And not just with anyone: with the Archangel Raphael. It's a love that's as powerful and entrancing as it is terrifying, and dangerous.

But the world won't stand still while Elena and Raphael enjoy their new-found love. Vampires and angels still go rogue, and it's still Elena's job to hunt them down and return them to their angelic masters. For all that she is exceptional. Elena isn't invulnerable - and the more obvious her talents become, the bigger a target she could find herself . . .

Review:
When Elena wakes up after a year long coma she is like a different person, her new abilities will only make her stronger in the long run but for now she is even more vulnerable than she was before. Raphael has taken her to the Refuge so she can continue her recovery but his enemies see her as his weak point and seek to destroy her. When mysterious murders start to occur it is Elena who has the ability to track down the killer but can Raphael keep her safe?

I loved the first book in this series (Angel's Blood) and was glad I already had a copy of Archangel's Kiss so I could continue Elena & Raphael's journey immediately. I had high expectations for this book and Nalini Singh didn't disappoint me, if the rest of her books are as good as these 2 then she will be added to my list of must buy authors. This series continues to straddle the lines between paranormal romance and urban fantasy, the beginning of Archangel's Kiss was definitely more focused on the romance and then the action kicked into gear for the second half and left me breathless with anticipation. If you're a fan of either genre then I'm sure the series will have enough to keep you happy, my only recommendation would be to make sure you read the books in order but you should definitely read them!

I love reading about Elena and Raphael and their relationship develops really nicely throughout the book. Raphael can come across as possessive and jealous but Elena also brings out his more caring and sensitive side and he is starting to learn that he can't force Elena into things, she has to choose to do them. Elena isn't used to having anyone to rely on, we saw in the first book how her father had rejected her after the deaths of her mother and sisters so know that she has had to stand on her own two feet. Although she is physically weaker than those around her she still shows great strength of character and refuses to show her fear. I was glad to find out more about her past and the events that lead her to become a Guild Hunter and I loved seeing her slowly learn to trust Raphael and start to open up to him.

The world Nalini Singh has created is rich in detail and easy to picture, although her angels are hardly the benevolent creatures they are usually portrayed as they are fascinating to read about and we learn a lot more about their hierarchy in this book. Archangel's Kiss is a romantic, fast paced read that will have you hooked from the first page and leave you desperate for the next installment. A highly recommended series but make sure you start with Angel's Blood!