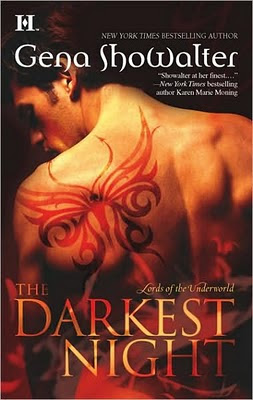 Every night for thousands of years, he has been murdered and sent to the fires of hell...

Cursed by the gods, bound to a rage-filled spirit he can barely control, Maddox has all but forgotten his humanity - until Ashlyn Darrow comes to his prison in Budapest seeking help.  Maddox finds his anger is soothed by her presence.  But he can't help question why a beautiful innocent has come looking for the Lords of the Underworld.

Ashlyn is tortured by voices from the past - and her knowledge might be enough to free Maddox from his death-curse.  When an extreme sacrifice is demanded, will Maddox's superhuman strength be enough to save them both?

Review:
As trusted warriors who were in charge of guarding the King of the Greek Gods, Maddox and his friends were insulted when someone else was chosen to protect a powerful box.  Determined to prove that a mistake had been made they stole the box and in the process released the demons it contained, causing devastation that the world had never seen the likes of before.  With the box missing and no other way to bring the demons under control the Gods decided a fitting punishment would be to make each of the warriors host one of the demons inside their bodies.  Now the immortal Lords of the Underworld have spent thousands of years living in torment, suffering daily and struggling to control the demons within. Maddox has a second curse though and every night he is killed and has to spend the night being tortured in hell before coming back to life in the morning.  Nothing has eased his pain, that is until he meets Ashlyn who has a calming effect on both him and his demon.  Can she find a way to help rid him of his curse?

I've heard a lot of good things about this series and it's one that I've been wanting to start for a long time now.  I love a good paranormal romance and The Darkest Kiss is a promising start to a series that I'm sure I will enjoy.  Like any first book in a series there is a lot of world building as we are introduced to each of the warriors and start to find out about the various torments caused by the demons trapped inside them, I did find myself getting a bit confused about who everyone was at the beginning but by the end I was hooked.  I honestly couldn't say who's story I'm most looking forward to, each of the warriors has something about them that left me wanting to know more!  I loved the use of Greek mythology and this made a refreshing change to all the vampire romances I've been reading recently.

Maddox is the keeper of Violence and struggles to control the demon's vicious impulses, this has caused him to do terrible things in the past and is what led to the second curse he had placed on him.  He feels guilty for his actions and accepts his punishment but is scared to be close to anyone in case Violence causes him to hurt them.  When he first meets Ashlyn he feels peace for the first time in years but he is terrified of what the demon could do to her.  I love a good tortured hero so Maddox was my kind of guy and watching the way he was so protective of Ashlyn was beautiful to see.  It doesn't hurt that he is as sexy as sin and there is some great chemistry between the pair of them.

Ashlyn has a curse of her own and no matter where she is she is able to hear every conversation that was ever held in that location.  The voices are enough to drive her insane so when they are silenced in Maddox's presence she is immediately drawn to him.  I'll admit now that Ashlyn wasn't my favourite heroine ever, she can come across as quite weak at times and there were some inconsistencies in her character where she is supposed to be naive and innocent but acts like she is much more experienced.  However, I did really like her when she tried to protect Maddox from the other warriors even though she was obviously no match for them physically.  By the end of the story she had grown on me and I thought she was a good match for Maddox.

I would have liked to have seen more of the battle between the warriors and the hunters who have been their sworn enemies for centuries but I can see this developing as the series progresses when the author isn't having to introduce a whole new cast of characters to her readers.  I'm also very curious to see how things play out between the Greek Gods and the Titans - that should add a really interesting element to the future plot arc.  Overall I'm really looking forward to continuing with this series and would recommend it to fans of J.R. Ward, Lara Adrian and Kresley Cole.