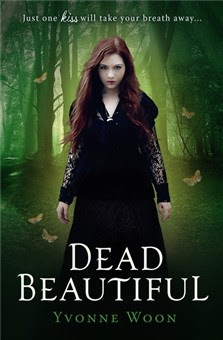 Desire.  Danger.  Destiny.
Little did I know that this is what I would find at Gottfried Academy.

Coming from sunny California, the mist-shrouded Academy was a shock, with it's strange customs, ancient curriculum and study of Latin - the language of the dead.  Then I discovered that the school has more than one dark secret...

I also discovered Dante.  Intelligent, elusive and devastatingly gorgeous, most people can't decide whether they love, hate or fear him.  All I know is that when we're together, I've never felt more alive - or more afraid.

Does finding your soulmate mean losing yourself?

Review:
On her 16th birthday Renee discovers her parent's bodies in the woods and her life is turned upside down.  She is convinced that their deaths are suspicious but everyone else is telling her that it was natural causes and she doesn't know what to believe anymore.  With her estranged grandfather now her guardian she is uprooted from everything familiar to her when he insists on sending her to Gottfried Academy a boarding school on the other side of the country.  When she finds out about a mysterious death at the academy that appears to have happened in similar circimstances to the way her parents died she is determined to find out more but to do that she needs to get to know the mysterious Dante - a boy who obviously has secrets to keep.

As a massive paranormal fan I've been wanting to read Dead Beautiful for a while now and I'm so glad I did.  I was captivated by the story from the moment I picked it up and although it is a big book I had finished it within 2 days.  Dead Beautiful does have some similarities to Twilight but these are relatively minor and the main story was very different to anything else I've read.  Yvonne Woon has created a detailed and interesting mythology that is slowly revealed as you are reading.  I don't want to give any spoilers by saying too much but I loved the way the mystery is revealed in small pieces so that just when you think you have everything figured out the plot would twist again and you'd realise how wrong you were.

The main character Renee was great, she had so much to cope with in such a short time but she wasn't someone who was going to sit around whining about everything.  She was a lot stronger than I would have been in her situation and I loved the way she tackled things head on and didn't let herself be intimidated by her creepy new school or it's students.  Gottfried Academy had a fantastically creepy location for a paranormal story and I was fascinated by the old fashioned subjects that Renee was forced to take.  Love interest Dante is a perfect brooding, mysterious stranger that a lot of us girls can't resist!  It takes a while before we find out much about him and I'm sure there is still more to discover as the series progresses.

Dead Beautiful ends on a cliffhanger that leaves you desperate to get hold of the next installment.  I know I'll be picking up a copy of Life Eternal as soon as it is available and I would recommend this series to any paranormal fan - especially lovers of Twilight!

Source: Received from Usborne in exchange for an honest review