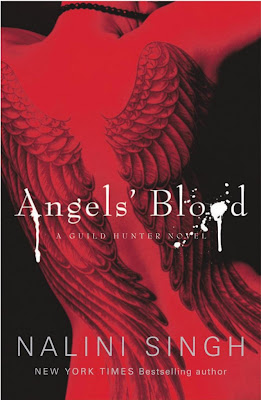 Vampire hunter Elena Deveraux knows she is the best - but she does not know if even she is good enough for this job. Hired by the dangerously beautiful archangel Raphael, a being so lethal that no mortal wants his attention, Elena knows failure is not an option - even if the task is impossible.

Because this time, it's not a wayward vamp she has to track. It's an archangel gone bad.

The job will put Elena in the midst of a killing spree like no other - and pull her to the razor's edge of passion. Even if the hunt does not destroy her, succumbing to Raphael's seductive touch just might. For when archangel's play, mortals break . . .

Review:
In a world where vampires and angels live alongside humans Elena is a hunter who is employed to track down rogue vampires and return them to the angel who created them. She isn't just a good hunter, she is the best, but that may not be a good thing now she has caught the attention of the world's most frightening Archangel Raphael. He has a job for her but tracking down an evil Archangel isn't going to be easy and she is putting her life at risk even attempting it. But going against Raphael's wishes isn't an option so Elena finds herself stuck between a rock and a hard place - can she live to tell the tale?

I've heard so many good things about Nalini Singh and both her Guild Hunter and Psy Changeling series so I couldn't resist giving Angel's Blood a try. Now I know what all the fuss is about and I'll definitely be ordering the rest of her books! Angel's Blood is billed as an urban fantasy story and it contains all the elements I'd look for in good UF but I think it straddles the line with paranormal romance and fans of both genres are sure to love it.

Elena is a fantastic heroine, as a human she is physically weaker than the vampires and angels but she knows how to hold her own. She may be terrified but she refuses to show it and I loved some of the snarky comments she came out with. What we learn about her past adds depth to her character but there is still a lot of information we don't know and I'm sure we'll discover more as the series progresses. I enjoyed watching her interactions with her friends at the guild but the best thing by far was the banter between her and Raphael. The pages sizzle when those two are in the same room and I couldn't put the book down.

Raphael isn't your usual hero, he is old, incredibly powerful and at times downright scary. You just know he isn't someone you want for an enemy as he'd squash you like a bug but despite that there is something so delicious about him that you can't help wanting him. He is sexy as sin and I loved the description of his wings (I need to get my hands on some angel dust!). I think his attraction was described perfectly in this quote:


"Because the very thing that repelled her about Raphael also attracted her. Power. This was a man she couldn't take on and hope to win. A hotly feminine part of her appreciated that kind of strength, even as it infuriated her."

I don't want to go into the plot because I want you to discover the story yourself but the action scenes are fast paced, the descriptions of the angels are beautiful and the twist at the end was fantastic! Angel's Blood is probably my favourite adult read of the year so far and I would highly recommend it to urban fantasy and paranormal romance fans. I've already read and loved the second book Archangel's Kiss (review coming soon) and am waiting impatiently for my copy of Archangel's Consort to arrive!