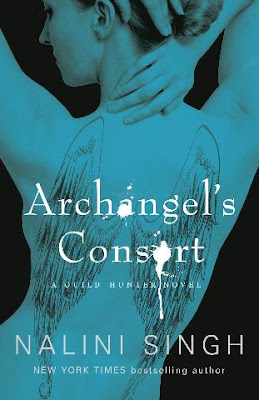 Vampire hunter Elena Deveraux and her lover, the lethally beautiful archangel Raphael, have returned home to New York only to face an uncompromising new evil.

A vampire has attacked a girls' school - the assault one of sheer, vicious madness - and it is only the first act. Rampant bloodlust takes vampire after vampire, threatening to make the streets run with blood. Then Raphael himself begins to show signs of an uncontrolled rage, as inexplicable storms darken the city skyline and the earth itself shudders.

The omens are terrifyingly clear.

An ancient and malevolent immortal is rising. The violent winds whisper her name: Caliane. She has returned to claim her son, Raphael. Only one thing stands in her way: Elena, the consort who must be destroyed . . .

Review:
It is time for Vampire Hunter Elena to return to New York and let the world see the changes she has gone through but as nothing ever goes smoothly for the couple they soon find themselves caught up in the hunt of their lives. As more and more vampires are taken over by bloodlust they quickly realise that all is not what it seems, a powerful enemy is rising, a face from Raphael's past that he hoped never to see again and one who is determined to get Elena out of the way. Even working together this enemy may be too strong for them, their only hope is to defeat them before they regain their full power but that would mean breaking one of the most ancient angelic laws.

I'm a huge fan of this series and I really enjoyed this instalment of Elena and Raphael's adventures. Elena is still coming to grips with her immortality and the new abilities she gained when she became an angel. Although she is stronger and heals faster than she ever did as a human she is still weak compared to other angels and even the older vampires who protect Raphael. She is determined to train as hard as possible though because she doesn't want to be seen as Raphael's weakness but anyone who knows how much he cares for her automatically sees her as a target. It isn't easy for her to adjust to her new life, she is still learning the rules and learning what her body is now capable of but she is just as brave and determined as she ever was. She may be weaker than her enemies but she refuses to back down and wants to stand by Raphael. The two of them will always be stronger together than they are separately and I love that although they are both uncertain when it comes to relationships and find it difficult to trust they work together to overcome their issues.

We learn a lot more about both of their pasts in this book and discover a lot about their families that make us question things we thought we already knew. Elena has always had a very poor relationship with her father (I can't stand the man!) but although they are a long way from a close father / daughter relationship we do see a glimmer of hope that he isn't all bad. One new thing that Elena has to contend with though is the mother-in-law from hell, seriously if you think your MIL is bad she's got nothing on Caliane! Of course Elena isn't going to put up with crap from anyone and there are some really amusing moments where she stands up for both herself and Raphael. We already knew that Raphael didn't have the best relationship with his mother but what we find out about his past is heartbreaking and goes a long way to explaining why he is so closed off to the people around him. He is lucky to have his Seven to rely on but it is Elena who has really started to bring him out of himself. Raphael has changed so much from when we first met him, he is still dangerous and he still scares the crap out of me sometimes but he can also be so unbelievably sweet and protective over Elena. Their relationship has come on leaps and bounds since they first met but they still have their ups and downs, they have to work hard and find ways to compromise so that they can both be happy but they are both willing to put the effort in.

Archangel's Consort is just as sexy as the first two books in the series, there is no missing the fireworks when Raphael and Elena are in the same room, but there is also a deeper connection between them now that wasn't there in the beginning. We are also getting to learn more about Raphael's Seven and I can't wait to spend more time with each of them. Illium is a particular favourite of mine and I really hope he gets a book of his own at some point but even Dimitri and Venom are growing on me now that I know them better. Alongside the hot sex and great character development Nalini Singh has created a fast moving plot that had me gripping the pages. I didn't want the story to end and I'm just relieved that I already have the next book waiting for me to read it. This remains one of my favourite paranormal series and I don't see that changing any time soon.