Cover Reveal: His Risk to Take - Tessa Bailey + Giveaway for a $50 Amazon Voucher

I really enjoyed Tessa Bailey's debut novel Protecting What's His so I'm excited to be taking part in the cover reveal for the next book in the series His Risk to Take. 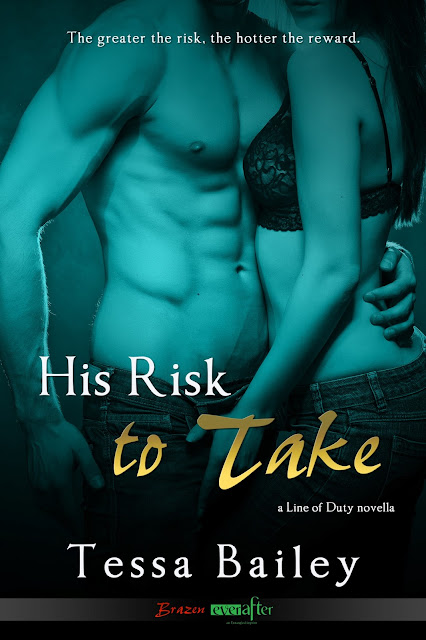 How hot is that cover? Now have a look at the blurb and let me know what you think!

The greater the risk, the hotter the reward?

Homicide cop Troy Bennett had a reputation on the Chicago PD for being fearless and in control?until the night his daredevil partner is killed during a raid. From that moment on, he swears he?ll never again be responsible for the loss of a loved one. To escape his demons, Troy transfers to the NYPD, bringing him up close and personal with Ruby Elliott, a beautiful, street-savvy pool hustler.

Reckless and stubbornly independent, Ruby embodies everything Troy's avoiding, but when she walks into O'Hanlon's Pub and blows his carefully laid plans to hell, Troy knows he has to have her risks be damned. But there's a connection between Ruby's shadowed past and a case Troy's working involving a notorious Brooklyn felon, throwing her safety into jeopardy. Confronted with his biggest fear, will Troy push Ruby away to keep her safe or fight to keep her in his arms where she belongs?

Line of Duty Series:
Protecting What's His
His Risk to Take
Further titles & release dates to be confirmed

Tessa Bailey and Entangled Publishing are offering a $50 Amazon Voucher to one winner, they will be choosing the winner and contacting them directly. You can enter the giveaway using the Rafflecopter widget below: