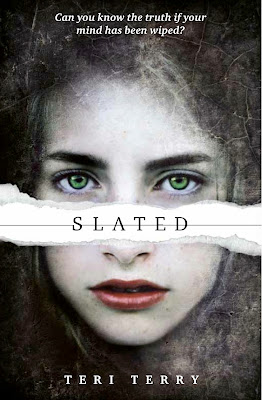 Kyla’s memory has been erased,
her personality wiped blank,
her memories lost for ever.

The government claims she was a terrorist, and that they are giving her a second chance - as long as she plays by their rules. But echoes of the past whisper in Kyla’s mind. Someone is lying to her, and nothing is as it seems. Who can she trust in her search for the truth?

Review:
Kayla has been Slated, she doesn't know what crime she committed but only the worst criminals and terrorists are Slated so she knows it must have been bad. Her memories have been completely wiped so that she can be reintegrated into society in a new town, somewhere nobody knows her and with a new family. She remembers nothing of her past but must now try to fit in and stick to the rules, she must stay under the radar because this is her one and only chance to build a new life for herself. As part of the Slating process Kayla has been fitted with a levo that monitors her emotions, her levels are regularly checked and if they fall below a certain point indicating a strong emotion like fear, hate or anger then the levo will render her unconscious or worse still brain dead. Kayla must find a way to keep her emotions in check and get to know a new family and a new life but she isn't like the other Slated which is a dangerous thing. Why was she Slated, why are so many teenagers disappearing and who can she trust to help her find the answers?

I really enjoyed Slated and am just glad that I don't have to wait before I can read the sequel Fractured because this ends on quite a cliffhanger! I enjoyed the concept of the story, it is such an interesting idea that a criminal's mind could be wiped so that they are no longer aware of the crimes they committed. If they remember nothing about their past and are given a completely fresh start in a different environment would they go on to commit further crimes in the future or would they become a productive member of society? It's an interesting take on the nature versus nurture debate and I was fascinated to see how it would play out. I think there is a lot of room to delve into that further as the series continues.

Kayla has had to relearn everything since she was Slated, she'd never seen a car before and couldn't even work out how to open the door or do the washing up without help. In many ways she starts off like a teenager sized toddler, completely unaware of the dangers around her and needing constant babysitting. She is a quick learner though and does her best to settle into her new life no matter how strange she finds everything. The trouble for poor Kayla is that the Slating process doesn't seem to have worked correctly for her, where the other Slated teenagers she knows are very laid back, relaxed and happy to just let life happen around them Kayla questions everything. She is suffering with nightmares but are they really just dreams or could they be memories from her previous life? Kayla knows that if anyone finds out just how different she is then she'll be in major trouble. She is scared of her feelings and she doesn't know who to trust or turn to, people she thinks she can rely on let her down and others who she is wary of prove to be valuable allies.

Slated is a great start to the series and a fab debut from Teri Terry. I have to mention how refreshing it was to come across a dystopian story set in the UK, and one that is scarily realistic too. So many things in this story made it feel like this could be a possible future for us and I really appreciated the little details that the author has woven throughout the story to give it that authenticity. The plot is fast paced so although this is a large book with over 400 pages I actually found it quite a quick read and it is full of twists and turns to keep you guessing. I'm looking forward to continuing the series and finding out exactly what Kayla has got herself caught up in.