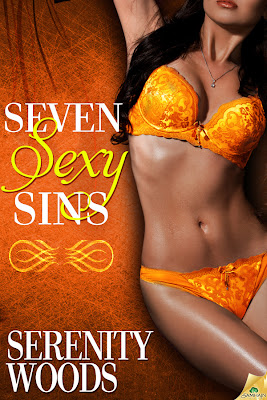 The road to passion is paved with guilty pleasures.

Faith Hillman is in a bit of a pickle. She’s been commissioned to write a series of magazine articles on spicing up your love life. She’s got the theme—the “Seven Sexy Sins”—but there’s one major problem. She hasn’t experienced any of them.

Ever since Faith’s older brother gave Rusty Thorne a black eye for kissing her on her eighteenth birthday, he’s kept his distance, waiting for the right time to make his move. This is it. She needs a research partner? He’s the man for the job.

When sex-on-legs Rusty offers his services, Faith is all over it—with one caveat. The notorious heartbreaker must sign a confidentiality contract. Just to keep him safe from her brother’s wrath, of course…and her heart off Rusty’s long list of conquests.

As they work their wicked way through the list, the implications of the contract hit Rusty as hard as the handcuffs binding his wrists to the bed. It isn’t just Faith’s touch that rocks his world. It’s the way his heart likes it that blows his defences out of the water. And makes him wonder, when the contract ends, if he can bear to let her go.

Warning: Includes rebellious hero who enjoys inserting Tab A into Slots B, C, and even occasionally D. Also includes highly inappropriate use of a Mars Bar.

Review:
Faith is a journalist who has been asked to write a series of magazine articles aimed at couples who are looking to add some extra fun to the bedroom. She has come up with a wonderful idea for a series based on the seven sexy sins but unfortunately the things she wants to include are ones that she has never experienced. Rusty has had a crush on Faith for years but being best friends with her older brother has always made her off limits. Now that he knows she is looking for someone to help her with her research he just can't resist offering his services. Faith knows that Rusty is a ladies man and is sure he will be the perfect guy to help her but can she spend seven nights with him fulfilling her wildest fantasies and manage not to get her heart broken in the process?

When I was invited to take part in the blog tour for the second book in this series, Six Naughty Nights, I couldn't resist after reading the synopsis. I'm a bit OCD when it comes to reading a series in order though and I'm so glad I decided to read Seven Sexy Sins first because I really enjoyed Faith and Rusty's story. If you enjoy a good friends to lovers romance and you like your stories hot with a capital H then you're in for a treat with this one. This is my first taste of Serenity Woods' writing and I'll definitely be coming back for more.

Faith and Rusty are both great characters, they have been friends for years and both care deeply about each other. They have also both been secretly crushing on each other but too scared to act on it in case it ruins not only their friendship but also Rusty's relationship with Faith's brother. When Rusty offers to help Faith research her articles she knows it would be very easy to lose her heart to him so she makes him sign a contract agreeing not only to keep their relationship secret but also stating that they will only spend seven nights together, one for each article she needs to write. She knows all about Rusty's reputation and doesn't think for a second that she could ever tempt him to settle down. Of course, just because she has a contract in place it won't necessarily keep her heart safe but thankfully Rusty is falling just as hard as she is. The only thing standing in their way is the reaction her brother would have - after all he punched Rusty after seeing them share a kiss years ago.