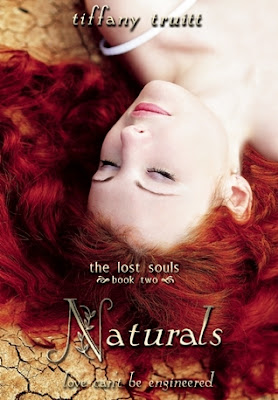 Ripped away from those she loves most, Tess is heartbroken as her small band of travelers reaches the Isolationist camp in the mysterious and barren Middlelands. Desperate to be reunited with James, the forbidden chosen one who stole her heart, she wants nothing to do with the rough Isolationists, who are without allegiance in the war between the Westerners and Easterners. But having their protection, especially for someone as powerful as Tess, may come at a cost.

When James returns, Tess’s world once again feels complete—until she discovers her sister, Louisa, is in danger, held captive by the rogue chosen one George. Tess will do anything to protect her loved ones—but will the price be more than she can give?

Tiffany Truitt’s Lost Souls series is a thought-provoking, thrilling story that asks who the true enemy really is—the chosen ones who are different, or the naturals…who are just like us.

The Lost Souls Series:
Chosen Ones
Naturals
Further titles and release dates to be confirmed

Review:
As this is the second book in the Lost Souls series I'm going to assume that anyone reading this review has already read the first book. If you haven't read Chosen Ones be warned that this review will contain spoilers so you may wish to look away now. I have to admit that while I though Naturals was an OK read it did have that second book in a series feel to it, there is much less action than I wanted and the story is more character driven. I felt the plot moved quite slowly and I found it very easy to put the book down to go off to do something else and I almost had to force myself to pick it back up again. When I was actually reading it was enjoyable enough but I was never compelled to carry on reading.

I had expected quite an action packed story, Tess, Henry and Robert needed to complete their journey to the Isolationists and then there was mention in the blurb of them going back to Templeton to rescue her sister Louisa which promised plenty of danger. As it was the journey to the Isolationist's camp was fairly uneventful, there were a few minor issues along the way but nothing that raised my pulse rate. The majority of the book is spent at the camp where Tess and Henry are learning how different life is in the Middlelands compared to the compound where they were raised. The Isolationists are suspicious of outsiders and don't seem very happy about having Tess, Henry and Robert living with them so it is up to them to fit in and find a way to prove to the community that they can be valuable assets.

Although I felt the romance between Tess and James happened a little too quickly in the first book I had really wanted to see more of them together and I particularly wanted to get to know James better as I felt we didn't really learn much about him in the first book. I had high hopes for that but unfortunately he doesn't even make an appearance until we're 70% into the story. I'm not a huge fan of love triangles so it won't surprise anyone who knows me that I was really annoyed by the way Tess turned to Henry in James's absence. Especially when it was so obvious that she was just using him because he was there and she was not actually falling in love with him. I ended up being annoyed with her and feeling sorry for both Henry and James and that doesn't really leave me feeling much confidence for any future relationship developments.

Things really started to pick up for me after James's reappearance and when they finally left the camp to go on the rescue mission (which I think was at about 85% into the story). The pace picked up, the danger increased and I actually started to feel invested in what was happening. Unfortunately that part happens so quickly when I really wanted it to keep going. There is a major twist revealed at the end that definitely makes me curious about the next book in the series though. One thing I will say is that I liked Tess much more in this book than I did in the first (apart from the way she treated Henry anyway!), she is a much stronger character now and more willing to stand up for herself and what she believes in. She does still have a tendency to think that the world revolves around her but I think that can be quite a common trait amongst teenagers so I can forgive her for it. What I really want to see in the next book is more action and less sitting around talking about what they should be doing. If the pace could be as good for the whole book as it was for the last 20% of this one then it would be a fantastic read. As it is I do think that anyone who enjoyed Chosen Ones will want to read Naturals to continue Tess's journey and it looks like most other reviewers enjoyed it much more than I did. It probably lost a star with me just because I hate love triangles so much so anyone who don't mind them will automatically be at an advantage. 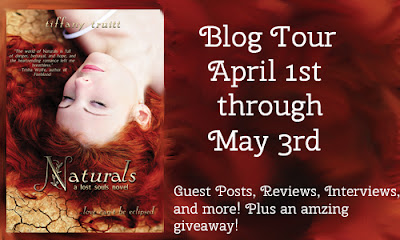 Tiffany Truitt and Entangled Publishing are hosting a tour wide giveaway to win one of paperback 3 copies of Naturals. You can enter using the Rafflecopter widget below. Winners will be announced via the widget and will be contacted directly by Entangled Publishing - I have no responsibility for this giveaway and no control over any of the details.