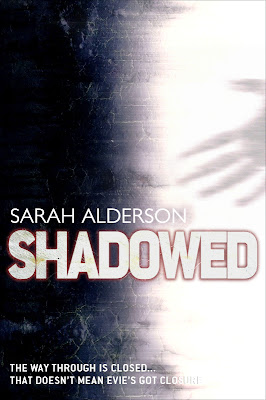 Fate has won. The realms have been severed...but the fight’s still far from over.

It’s been three months since the devastating battle that closed the way through between this world and the demon realms but Evie’s still reeling from all she's lost.

When news reaches her that a group of Originals is on the prowl in LA and growing in numbers, Evie must decide whether to join the rogue Hunters in a final battle or fight her fate one last time.

The way through might be closed. But that doesn’t mean Evie’s got closure.

Review:
After the killer ending to Severed I have been waiting months to get my hands on the final instalment to Sarah Alderson's Fated series. I couldn't wait to read Shadowed and find out for sure what really happened to all of my favourite characters, I honestly didn't have a clue what to expect from this book and I was kind of scared to read it in case I didn't like the way things turned out. It's actually going to be really difficult to write this review because I can't say too much about what happened in it without giving major spoilers for anyone who hasn't read the book. I think I'm going to have to keep things quite general because I want you to go into it completely blind just like I did.

One thing I can say about Shadowed is that it kept me on the edge of my seat, I went from shocked to elated, back to shocked, slipped into horrified followed by a taste of relieved before being shocked all over again. Really Sarah Alderson turned my world upside down more times than I can count and she left me reeling with the way things unfolded. No matter what you think is going to happen she will find a way to keep you guessing and that is one of the things I've enjoyed about this whole series.

The Evie we see in this instalment is very different to the Evie we've come to know and love in the previous books, she has been through a lot and her grief has changed her. She is now focused on revenge, she believes that if she can just make Victor pay then it will make her feel better. She is first and foremost a hunter though and when a group of Originals go on a killing spree she knows that she has to join the battle to stop them. It is going to take every resource the rebel hunters have to stop the Originals and that includes their Unhuman allies and even Victor. As much as she hates the idea of working alongside the man who destroyed her family she is grown up enough to put her revenge to one side for the sake of humanity no matter how painful she finds it to do so.

I refuse to mention any other characters in this review - you're just going to have to read the book for yourself to find out who makes an appearance. Shadowed is a satisfying ending to the Fated series, it answers enough of my questions to not leave me hanging but does leave things open enough that further books could be added in the future and I for one hope that we will see more of Evie and her friends somewhere down the line. If you have enjoyed the previous books then you really won't want to miss the conclusion to Evie's journey!