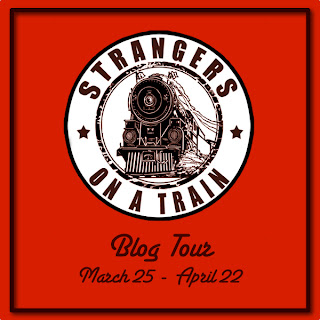 I'm thrilled to be taking part in the Strangers on a Train blog tour to celebrate the release of a series of 5 fabulous short stories by 5 fantastic authors: Serena Bell, Donna Cummings, Samantha Hunter, Ruthie Knox & Meg Maguire. I have really enjoyed reading each of these stories (my reviews have already been posted for 3 of them and the remaining 2 will be up on the blog tomorrow) and can't recommend this series highly enough. Anyway, I'm thrilled to welcome Serena Bell to the blog today to tell us a bit more about where the idea for the series came from. She is also going to be sharing an extract from her story Ticket Home and she is very generously offering an ebook copy of the story to one lucky winner. Before we get started I want to share the short blurbs and cover images for each of the stories in the series:

Tight Quarters by Samantha Hunter
Visit Samantha Hunter's website
Reid isn’t happy about the mix-up that saddles him with a claustrophobic roommate on his New York train tour. Then his weekend with Brenna progresses to a weekend fling, and so much more.

Ticket Home by Serena Bell
Visit Serena Bell's website
Encountering her workaholic ex on her commuter train is the surprise of Amy’s life. Especially since Jeff seems hell-bent on winning her back.

Thank You for Riding by Meg Maguire
Visit Meg Maguire's website
At the end of Caitlin’s commute, her extended flirtation with a handsome stranger finds them facing a frigid winter night locked in an unheated subway station.

Back on Track by Donna Cummings
Visit Donna Cummings' website
A wine tour isn’t enough to take Matt’s mind off his baseball slump—until sexy, funny Allie plops into the adjacent seat and tells him three things about herself. One of them, she says, is a lie. Then Allie lets slip one truth too many…

Buy Links for the series:
Strangers on a Train at Amazon.co.uk

Now please give a very warm welcome to Serena Bell . . .

Welcome to the Strangers on a Train blog tour, and to Feeling Fictional (Thank you for hosting me, Sarah!)! Strangers on a Train is a series of five stories—quick, hot, often funny—about romances that take place on trains. The authors are me, Donna Cummings, Samantha Hunter, Ruthie Knox, and Meg Maguire, and we had a ton of fun coming up with this concept.

The idea was born when Ruthie and Sam got intrigued by a Tumblr called “Hot Guys on the Train” featuring stealthily snatched photos of unsuspecting male commuters. From there, it was a short ride to the idea of five stories based off romantic and/or sexy encounters on trains (or in train stations or train museums, as is the case in two of our stories). We used the title “Strangers on a Train” from almost the very beginning, so all the stories riff off that idea.

My story, Ticket Home, is the only one in which the stranger in question isn’t the hero of the story. In Ticket Home, Amy flees across the country to escape Jeff’s workaholism, only to have him stalk her train commute, hell bent on riding with her until she agrees to come home with him. The “stranger” is a random guy on the train, “Brooklyn guy,” who becomes instrumental in helping Amy find her way.

Here’s an excerpt from the story, in which the heroine first encounters the stranger who becomes her guardian angel:

“Amy—” He swayed as he loomed over her, suspended from the metal rail above. His eyes were luminous and dark under those gorgeous lashes, filled with something big he wanted to say to her. Hope expanded like a brilliant bubble in her chest. “I’m so sorry, Ames. If I could go back and do it differently, if I could go back and hear you out, and not be such a stubborn son of a bitch, I’d do it. I don’t know why I reacted the way I did. I don’t know why—”

A head poked out from the seat in front of hers, and a thick Brooklyn accent said, “D’ya mind? You’re not the only ones on this train.”

Jeff made a sound that might have been a laugh. He leaned closer, close enough that she could see the day’s beard growth clinging to his jaw, and asked, “Can I sit with you?”

She hesitated. She was afraid, afraid of her own susceptibility to his physical presence. Afraid if she let him slide into the seat, if he sat that close and smelled like Jeff, she would fall back into her old ways, forgetting that she had ripped herself away from him, Band-Aid from skin, and crossed an entire country to escape exactly this weakness in herself.

People had stacked up behind him, waiting to get by, and she still hadn’t moved from the edge of the seat, so he sat diagonally in front of her. When the other passengers passed, he turned around in his seat and tried to catch her eye. “I was so surprised.” His voice was low but clearly audible over the train’s clack. “You never said anything about wanting a different job, let alone one in New York. And you never mentioned you were applying for anything.”

Guilty as charged. She had clobbered him over the head with the news that she’d gotten the job, but everything had happened so fast—she hadn’t had any choice. And that didn’t excuse—

Ha, he remembered. She did. She hated an apology followed by an excuse.

He frowned. “I was harsh. I was dictatorial.”

“You were medieval.” Her voice surprised her. Louder than she’d meant it to be.

“Guys,” said the heavyset dark-haired guy in front of her. “I can watch all the reality TV I want at home. Can you save it?”

There were chuckles from some of the other passengers. Amy blushed.

Jeff leaned across the aisle toward the commentator. “Tell her she should let me sit with her. If I sit with her, you won’t have to listen to our conversation.”

“Don’t push your luck, dude,” the guy told him. “On the other hand—” He twisted around to address her. “Lady, can he sit with you? Please? For the good of the rest of us?”

She willed Brooklyn guy to vanish. Jeff too. Hell, she wanted the whole goddamned train full of laughing observers to disappear. “I’d rather he didn’t.”

But Jeff had risen from his seat and planted himself on the padded vinyl beside her, and she had to scoot away from his muscular thigh. She’d been chilly a moment earlier, and now she desperately wanted to sink into his heat. To press the side of her body to his, turn to him and draw every last ounce of his warmth into her skin. Her mouth.

Instead she slid herself as far into the corner as she could, against the cold molded plastic and metal trim. She brought her knees up to get more distance from him. Still, she could smell him over the ambient train smell of vinyl and disinfectant. He smelled like—like him. Like freshly dry-cleaned wool suit and dry-erase markers and Old Spice deodorant. Like power and success. Not, she told herself firmly, like home.

Not unless he’d changed.

Has a stranger ever changed your life, or even your day, your mood, or your perspective? A smile, a kind word (or a nasty one), a new way of looking at things from an unexpected person? Someone on an airplane, in a restaurant, at the library front desk, at a baseball game?

Bio:
Serena Bell writes stories for Harlequin Blaze, Samhain, and Loveswept about how sex messes with your head, why smart people do stupid things sometimes, and how love can make it all better.

Serena wrote her first steamy romance before she was old enough to understand what all the words meant and has been perfecting the art of hiding pages and screens from curious eyes ever since—a skill that’s particularly useful now that she’s the mother of two school-aged children.

She recently survived a cross-country move and is still plucking dishtowels out of her lingerie drawer. When she’s not scribbling stories or getting her butt kicked at Scrabble by a seven-year-old, she’s practicing modern dance improv in the kitchen, swimming laps, needlepointing, hiking, or reading on one of her large collection of electronic devices.

Serena blogs regularly about writing and reading romance at www.serenabell.com and www.wonkomance.com. She also tweets like a madwoman as @serenabellbooks.

Thanks for a fabulous guest post Serena, I hadn't come across the Hot Guys on the Train tumblr site before but I think it's a brilliant idea and I've really enjoyed browsing through some of the pictures! I'm not surprised it inspired you all to write stories & I've loved reading your different takes on the idea. I've been racking my brain trying to come up with a story where a stranger changed my life but at the moment I'm drawing a blank! I'm looking forward to seeing what everyone comes up with in the comments though :o)