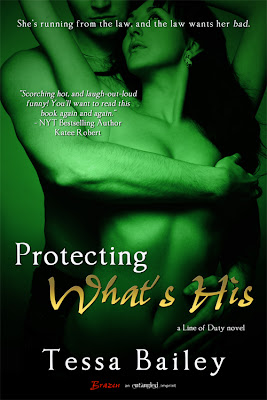 She’s running from the law, and the law wants her bad.

The opportunity was just too damn delicious for Ginger Peet to pass up. The purse full of money she finds—$50,000 to be exact—could give her and her teen sister the new start they need. So she grabs the cash, her gothy sibling, and their life-sized statue of Dolly Parton, and blows outta Nashville in a cloud of dust. Chicago, here we come...

Turns out, Chicago has some pretty hot cops. Hot, intense, naughty-lookin’ cops like Derek Tyler, who looks like he could eat a girl up and leave her begging for more. And more. Tempting as he is, getting involved with the sexy homicide lieutenant next door poses a teensy problem for a gal who’s on the lam. But one thing is certain—Derek’s onto her, and he wants more than just a taste.

And as far as he’s concerned, possession is nine-tenths of the law.

Review:
Ginger has spent years trying to raise her younger sister while their mother spends her time either drunk, high or just vanishing from their lives for long periods of time. She is sick of struggling to get enough money to buy food for them and of living in a house that is falling apart at the seems. When her mother passes out holding a massive wedge of money the temptation is too much to resist and Ginger takes the money to make a new start for herself and Willa. The girls leave Nashville far behind them and move to Chicago for a fresh start and to build themselves a stable home. On the run with stolen money and her under age sister the last thing Ginger wants is to catch the attention of the police but her new neighbour Derek is a sexy Lieutenant who is difficult to ignore. Derek knows that Ginger is hiding something and is determined to get to the bottom of it but he has no intention of handing her in. He has plans for Ginger but first he needs to gain her trust and help her find a way out of the mess she's gotten into.

I'm a massive fan of Entangled Publishing's Brazen line so I wanted to read Tessa Bailey's debut novel Protecting What's His from the minute I heard about it. I do love a sexy, domineering, alpha male and Derek fits that bill perfectly. I have to admit that there were a few instances where I felt his behaviour went a little too far though and unfortunately that did put me off him a bit. Thankfully his dirty talk was enough to keep me hooked though and boy does Derek know how to make a girl swoon! I have to include a couple of my favourite quotes here just to prove it:

"Let me be clear, Ginger, since you insist on talking in circles. I want you underneath me in my bed. I want to be buried inside you so deep that I have to remind you of your own name."

“Baby, I don't need an excuse to cuff you. I just need the opportunity.”

“The longer it takes me to get between your thighs, the rougher I'm going to be when I finally get there. Understand?”

Ginger is a great heroine, she is incredibly caring and protective of the sister that she has basically raised. Ginger never really got to have a childhood herself but she has always done as much as she could to protect Willa from the nasty side of life and she wanted this fresh start mainly for Willa's sake. You have to admire her determination to make something of their lives and get them away from their difficult start. One of my favourite things about the book was the relationship between Ginger and Willa, they have a strong bond and the pair of them are full of snark and sarcastic banter which made for amusing reading.

Although I felt Derek came on too strong at times and some of his behaviour would surely have lost him his badge if his bosses had found out about it I did still think he was good for Ginger. She was so wary of ending up like her mother that she pushed everyone but Willa away and she believed that she would always have to do everything on her own. She needed someone who was going to stand his ground and not let her walk away and Derek was willing to do that, he knew when to give her space and when to push her for more which helped him break through her tough outer shell.

Protecting What's His is a great debut from Tessa Bailey and the start to a promising new series that I'll definitely be continuing when the next book is released. If you're a fan of contemporary romance and like your men to be alpha to the extreme then you're going to love this book. 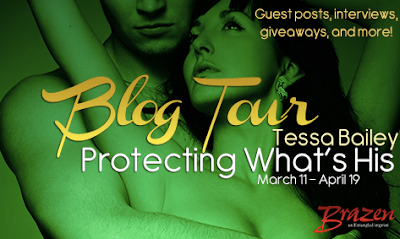 As part of the blog tour I'm excited to offer one of my followers an ebook copy of Protecting What's His thanks to Entangled Publishing.
a Rafflecopter giveaway