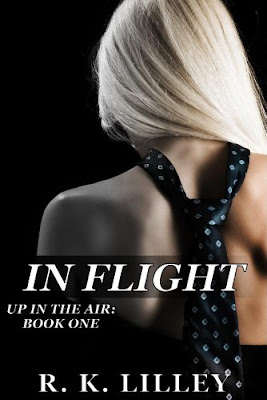 When reserved flight attendant Bianca gets one look at billionaire hotel owner James Cavendish, she loses all of her hard-won composure. For a girl who can easily juggle a tray of champagne flutes at 35,000 feet in three inch heels, she finds herself shockingly weak-kneed from their first encounter. The normally unruffled Bianca can't seem to look away from his electrifying turquoise gaze. They hold a challenge, and a promise, that she finds impossible to resist, and she is a girl who is used to saying no and meaning it.

Bianca is accustomed to dealing with supermodels and movie stars in her job as a first class flight attendant, but James Cavendish puts them all to shame in the looks department. If only it were just his looks that she found so irresistible about the intimidating man, Bianca could have ignored his attentions. But what tempts her like never before is the dominant pull he seems to have over her from the moment they meet, and the promise of pleasure, and pain, that she reads in his eyes.

This book is intended for ages 18 and up.

Up in the Air Series:
In Flight
Mile High
Grounded

Review:
Bianca loves her job as a flight attendant, she gets to work with her best friend Stephan and she enjoys the travelling but most of all she loves the financial security it gives her. After her troubled childhood growing up with an abusive father she is determined to be independent as an adult and the last thing she is looking for is a relationship. That changes when she meets billionaire James Cavendish, she finds herself impossibly drawn to him and unable to walk away from the pleasure he promises her.

OK so I'm going to admit it, I think I've become a little bit addicted to reading about hot billionaire heroes and naive and innocent heroines so I couldn't resist picking up In Flight. This is being recommended to fans of Fifty Shades and Bared to You and I can see why even though I don't think In Flight is quite as good as either of those and I didn't find James as attractive as Christian or Gideon. I have to admit I was a bit disappointed overall and I didn't love it as much as I hoped I would. The story showed a lot of promise though, particularly towards the end, so I am planning on reading the second book to see what happens next.

In a lot of ways I quite liked Bianca, really liked the fact that she was so independent and that she wanted to stand on her own two feet. She doesn't want to feel like James is buying her attention and I can respect her for that. In other ways I found it difficult to believe that someone who is so innocent when it comes to men and has shown no interest in dating before would be so quick to jump into bed with James. I would have preferred it if he had had to spend more time wooing her because I'd have found that more realistic. I have mixed feelings about James too. There were so many eye roll moments at the beginning of the book that I seriously didn't think I was going to be able to finish it. For a guy to tell a girl that she needs to get herself on the pill so they can sleep together without condoms is not attractive - especially when he is saying that to a virgin who he isn't even dating and has literally just met for the 2nd time! There was another part where he tells her he's going to tie her to his bed and take her hymen that just made me cringe. I love dirty talk but that was pushing it!

James wasn't all bad though and I liked the fact that he was quite upfront about the way he was feeling. He understood Bianca's fears and was willing to help her work through them without pressuring her into something she wasn't ready for. I was pleased that James wasn't jealous of her relationship with Stephan and that he accepted that if he wanted to have Bianca in his life then he had respect how important Stephan was to her. I think my favourite character was Stephan though, he could come across as a bit of a stereotypical gay best friend at times but he was a great character who would do anything for Bianca. They had been through a lot together and that showed in how well they knew each other and how much they cared.

I'm really glad I stuck through the eye roll moments in the first third of the book because In Flight did really start to grow on me as I carried on reading. It isn't a perfect book but it is an interesting start to the series, it has some great characters and I have to admit the sex scenes were hot. I'm looking forward to reading the next book and seeing how Bianca deals with certain things that happened at the end of this story.