I'm very excited to be taking part in the blog tour to celebrate the release of Marianne Curley's latest novel Hidden. I have a fantastic guest post from Marianne to share with you but first let me share a bit more information about the book: 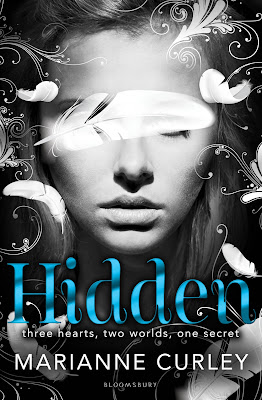 For as long as Ebony can remember, she’s been sheltered. Confined to her home in a secluded valley, home-schooled by her protective parents, and limited to a small circle of close friends. It’s as if she’s being hidden.

But something is changing in Ebony. Something that can’t be concealed. She’s growing more beautiful by the day, she’s freakishly strong, and then there’s the fact that she’s glowing.

On one fateful night, Ebony meets Jordan and she’s intensely drawn to him. It’s as if something explodes inside of her—something that can be seen from the heavens. Ebony still doesn’t know that she’s a stolen angel, but now that the heavens have found her, they want her back.

Make sure you watch this fabulous trailer too!

Now please give a very warm welcome to Marianne to the blog today!


Marianne Curley talks about the setting for Hidden

I have been fortunate to live in beautiful places almost all of my life. Born in the Hawkesbury Valley of New South Wales, my family home was an old timber house on a potato farm on the banks of the Hawkesbury River. We moved when I was only five years old, because a flood washed away the family home, but I have re-visited many times and still carry memories of the surrounding hills and wide open spaces.

We moved to the outskirts of Sydney where it was still green farmland. I lived there until I married at 21, and after my three children were born, my young family re-located to a coastal mecca on the mid north coast of New South Wales. Coffs Harbour was the perfect place to venture into writing. Well known for its stunning beauty and diverse landscape, Coffs Harbour is where the Blue Mountains comes closest to meeting the Pacific Ocean, creating a unique environment of beaches, mountains, rainforests, waterfalls, creeks, rivers and lush green valleys.

Twenty years later I entered another phase of my life. I was about to become a grandmother and I knew I had to live closer to my pregnant daughter, who had by then married and moved to Brisbane, Queensland. I knew it would be a difficult task to find an area more amazing and conducive to writing my paranormal fantasy novels than Coffs Harbour. But somehow I did, and four years ago I moved to a mountain with rainforests, creeks, waterfalls, outlooks across valleys to the Border Ranges, and spectacular coastal views from the Moreton Bay Islands to the Gold Coast. It was no surprise to find many artists living there.

Cedar Oakes Valley and Mount Bungarra are names you will find in my new book Hidden, but I created these places from the landscapes of my memory. Mountain Way is a real road in the Coffs Harbour area called Waterfall Way, which takes in amazing views as it winds up from the Bellingen Valley to Dorrigo. And I’m still discovering magical landscapes when I go for a drive. On one such trip, while plotting Hidden, I came across a high school in the Windaroo Valley with a soaring mountain behind it. From the road, the buildings appeared sunken into the landscape. All I could see were green rooftops and covered pathways, with only the hint of classrooms beneath. The school looked mysterious, and I had to stop and take notes because I had just found the school that was going to be Cedar Oakes Valley High in my new series.

Thanks for a fabulous guest post Marianne, I love to hear more about where authors get the inspiration for the settings or characters in their books. I would love to visit Australia one day, the scenery you described sounds absolutely beautiful & it must be lovely to be surrounded by such a wonderful setting!

What do you all think of Hidden? Have you read the book yet or is it on your wish list? Don't you just love the cover? I think it's stunning and it's so eye catching! I really enjoyed Ebony's story and can't wait to continue reading the series. I'll be posting my full review later today but it really is a book you don't want to miss out on!
at 09:00