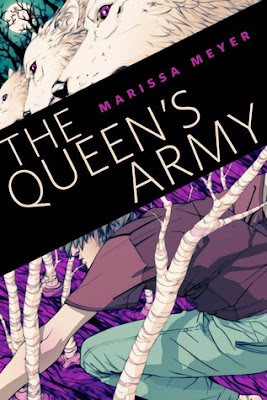 It is time. The boy must leave his family to serve in the Queen's army. To be chosen is an honor. To decline is impossible. The boy is modified. He is trained for several years, and learns to fight to the death. He proves to the Queen—and to himself—that he is capable of evil. He is just the kind of soldier the Queen wants: the alpha of his pack.

Quick Review:
I'm a massive fan of Marissa Meyer's Lunar Chronicles series and I love the fact that she has written a couple of free short stories that tie in with the series. The first story, Glitches, shows how Cinder came to live with her adopted family and was a great series prequel and the second story, The Queen's Army, fits in before Scarlet and is the story of a young boy who is forcibly recruited into Queen Levana's army.

Z was taken from his family against his will and genetically modified before spending years training as a fighter with the rest of his pack. It was quite heartbreaking to think of all the things he's been through but I really enjoyed getting a bit more background information about the queen's soldiers and how they came what they are today. Anyone who has already read Scarlet will recognise a few familiar faces and I think I enjoyed this more because of that but you won't pick up spoilers if you read this first.

Fans of the series won't want to miss these short stories, I always love it when author's give something back to their fans in the form of extra scenes (especially when you don't have to pay for them!). You can read The Queen's Army on the Tor website here: http://www.tor.com/stories/2012/11/the-queens-army

Source: Read for free on the Tor website here.

Other reviews of this book:
If you have reviewed this book on your blog please leave a link to your review in the comments & I'll add the link here.
at 12:00