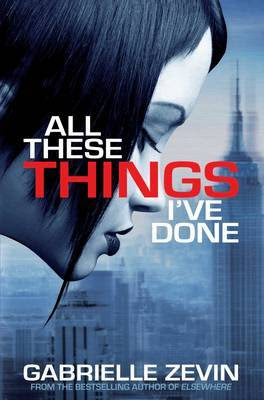 Sixteen year-old Anya becomes the head of a mafia family after her parents are both murdered by rival gangs. Although Anya is embroiled in the criminal world, she is determined to keep her brother and sister out of the mafia family, but her father’s relatives aren’t so keen to let them go. When Anya’s violent ex-boyfriend is poisoned with contaminated chocolate – chocolate that is produced illegally by Anya’s mafia family – she is arrested for attempted murder and sent to the notorious jail on Manhattan Island.

Eventually she is freed by the new D.A. in town, who believes she has been framed. But this D.A. is the father of Win, a boy at school to whom Anya feels irresistibly drawn, and her freedom comes with conditions. Win’s father wants to be mayor, and he can’t risk having his ambition jeopardized by rumors spreading that his son is seeing a member of a notorious crime family. Anya knows she risks the safety of her family by seeing Win again, but the feeling between them may be too strong to resist...

Birthright Trilogy:
All These Things I've Done
Because it is my Blood
In the Days of Death and Chocolate (release date to be confirmed)

Review:
Anya's father may have been the head of the Balanchine Mafia family before his death but she wants nothing to do with her family's illegal activities. Her parents were both killed thanks to her father's mob connections so Anya has very good reasons for wanting to distance herself from the business. Life has been full of hardships for Anya but she is determined to make sure her brother and sister are safe and to keep what's left of her family together. Things get complicated when her ex-boyfriend nearly dies after eating poisoned chocolate that she gave him, under arrest for attempted murder and sent to a juvenile detention centre Anya is no longer able to look out for her siblings. The District Attorney knows that she is innocent but he has conditions for arranging her release. The D.A. wants her to end her budding relationship with his son Win, he doesn't want his name linked with a famous Mafia family and he isn't above playing dirty to keep Anya and Win apart. Anya is left with a difficult decision, should she risk her family's safety for love or break her own heart and walk away from Win?

All These Things I've Done is a fabulously fast paced dystopian story set in 2084, there has been no great world ending disaster but resources are scarce and many items are under rationing. Items like coffee and chocolate have been banned which has led to a huge increase in organised crime. Anya's family is one of the main producers and distributors of chocolate and they have become one of the most important families in New York. You don't mess with the Balanchines unless you have a death wish. Anya has no interest in the family business though, she is too busy worrying about keeping her siblings together. Their Nan is their legal guardian but she is bedridden and being kept alive by machines, her brother suffered from brain damage in a mob hit that went wrong so although he is older than her his mental age is much younger and then she has her younger sister who she is determined to protect at any cost. Anya is the one who is holding her entire family together and it is a huge weight to put on such young shoulders. As much as Anya wants to keep her head down and stay out of trouble it seems that trouble has come looking for her. No matter what she does her situation keeps getting worse and you have to feel for her for all the things that she has been through. She isn't the kind of character who will give up though, she is so strong and determined and I love how protective she is of her family. Anya is under a lot of strain for a 16 year old and she copes with it far better than most people twice her age would.

Without a doubt Anya is a wonderful character, I love the relationships she has with her siblings and the way she interacts with the wider Balanchine family. I also loved the strong bond of friendship between her and Scarlet, we see backstabbing best friends far too often so it was nice to see a positive female friendship for a change. I really liked Win but I don't think I got to know him as well as I would have liked, since this is the first book in a trilogy I'm sure that will change as the series continues though. I also would have liked a little more information about why chocolate and coffee have been banned. I love the idea of them being controlled substances and the fact that the Mafia were supplying them through the black market rather than the kind of drugs we hear about now but I never really understood why they had been banned in the first place. I'm pretty sure that if someone told me I was no longer able to have coffee or chocolate I'd be willing to commit a crime to get hold of them though so that part was completely believable!

This was a fantastic start to the series and I can't wait to find out how things continue in Because it is my Blood. I'm looking forward to reading more from Gabrielle Zevin in the future and would definitely recommend this series to anyone who is looking for a series with a strong female role model, an interesting take on family loyalty and a great coming of age story. If you like your books fast paced with plenty of action then you're going to enjoy All These Things I've Done.