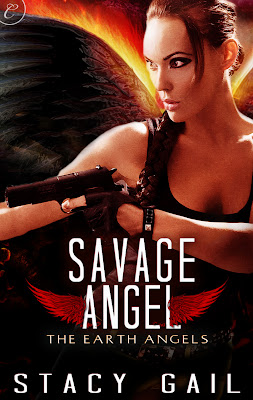 Feel nothing. Sara Savitch's personal mantra has been hard to live by ever since her torrid one-night stand with army doctor Gideon Mandeville. Descended from the Seraphim, angels known as heaven's soldiers, Sara may be an expert fighter, but she's an amateur when it comes to relationships.

Physically unharmed, but still battle-scarred, Gideon has returned to Dallas in the hopes of regaining his faith in humanity—and in himself. Instead he's walked into a nightmare. His father is on a serial killer's hit list, and has hired a personal bodyguard—the very woman who has haunted Gideon's dreams for a year.

As Sara works to build an impenetrable fortress around her client, she yearns to tear down the one around Gideon's heart. With his bitter rejection of warriors, will he ever be able to accept her true nature? Sara must find a way to trust Gideon with her secret as the killer closes in….

Review:
Sara's family run a private protection firm and as nephilim they all have unique abilities that help them to keep their clients safe. They have also built up a worthy team of humans who work with them. For her whole life Sara has trained to become a warrior, she is skilled with weapons and in hand to hand combat and she isn't afraid of anything. Her latest job is to protect a close friend of her father who believes he is being targeted by a serial killer. This is the kind of job she excels at but things are complicated when she realises his son is back on the scene. Sara and Gideon had a one night stand a year ago and she never quite got over him, now he is back from war and determined to keep her at arm's length. Can Sara avoid being distracted by Gideon for long enough to stop the killer?

Savage Angel is the second book in Stacy Gail's Earth Angels series and I have to admit I didn't enjoy it as much as the first book. I was a little confused that there was no crossover of characters but that wasn't the end of the world, I think my main problem was that I'm not a huge fan of either main character. Although this wasn't my favourite book in the series so far it wasn't a bad read and I'm still looking forward to continuing the series, I'm very curious to see who will be the hero and heroine in the next one.

Sara is a skilled warrior and someone you'd definitely be happy to have at your back if you were in trouble. She is a fierce fighter and will do whatever it takes to protect anyone who is in need but she has absolutely no people skills. She has never dated before and her lack of experience shows when it comes to Gideon. I liked the fact that she was so protective but I felt she came across as a little to naive. She is a successful woman who has been working as a bodyguard for years and who has been groomed from birth to take over the family business. Surely she would need some ability to read other people's emotions and to just generally be able to connect with others to be successful at her job? Apart from her fighting abilities she came across as so much younger than she really was and I found it quite irritating.

Gideon was a complete ass when he first meets up with Sara again, I don't think I've ever seen a hero treat a heroine so callously in a romance novel! I actually wanted to reach into the book and punch some sense into him. It takes a while but we do start to realise why he acts the way he did, that didn't excuse it for me but it did at least make me feel a little sympathetic towards him. What I didn't understand was why he did a complete 180 from being as nasty as possible to push her away from him to giving into his attraction and trying to kiss her. There was no revelation that made his actions make sense and I was just bewildered at his change of heart. After the way he had behaved I expected some major grovelling from him before Sara gave him a second look but that just didn't happen either. The fact that she let him off so easily made me lose respect for her and it also meant that Gideon didn't grow on me either. Although Savage Angel is a lot longer than the first book I felt their relationship was incredibly rushed and unbelievable.

In spite of my problems with the romance I do like the world building in this series, the fact that the nephilim are all so convinced that they can't meet up with others of their kind for fear of bringing down God's wrath is an interesting idea. I also liked the fact that Sara's abilities were different from Zeke's (the hero of the first book), it will be interesting to see what other powers we will come across in future books. I'm curious to see if they'll learn more about their origins as the series continues and we were definitely left with questions regarding the murderer in this story that I think are going to be answered in the next book. I can't pretend to be the biggest fan of this book but I'll still be keeping an eye out for Wounded Angel in the hope that I like it as much as the first book Nobody's Angel.

Source:Received from the publisher via Netgalley in exchange for an honest review