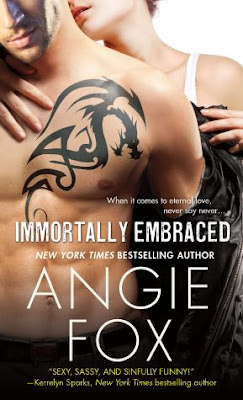 Even during a truce, Dr. Petra Robichaud has her hands full as the M*A*S*H surgeon to an army of warring gods—especially when Medusa herself turns up pregnant. Petra has no idea what to expect when a gorgon’s expecting, but she won’t let it turn her to stone. As the healer-hero of an ancient prophesy, it’s Petra’s job to keep the peace. But as the lover to a warrior demi-god, she knows how impossible some jobs can be…

Commander Galen is sexy, strong, and sworn to lead his team to hell and back. But when he announces to Petra that he can no longer risk her life for his love, the doctor is on her own…Until a mysterious new entity—in the form of a hot-blooded male—enters the picture. Can he be trusted? Can he be resisted? Meanwhile, an oracle delivers another prophesy that places Petra back on the frontlines with the man she may be bound to for eternity—in love, or in war…

Review:
Since the truce between the old and new gods has put a temporary stop to the huge number of casualties that Petra's MASH unit have been trained to deal with things have been a little quieter for Petra and her colleagues. The lull in emergencies has left more time for them to get back to being normal doctors though and Petra is enjoying having the chance to work with regular patients again. Life is pretty good until her lover Galen is called back to work to lead his team on a super secret mission. The fact that she might never see him again would be bad enough but it's made even worse when he dumps her before he leaves. Petra doesn't have much time to wallow in her heartbreak before a blast from the past makes a shocking reappearance. He was drafted to the other side and now he needs her help but can Petra sneak into enemy territory and make it back in one piece? Even if she agrees to help can she really trust a man who has already broken her heart once before? Things are about to get complicated.

I really enjoyed Immortally Yours so I couldn't wait to get my hands on Immortally Embraced. I have to admit that this book was nothing like I expected but thankfully that doesn't mean I enjoyed it any less. I was completely shocked when Galen walked away from Petra and I was even more shocked at the arrival of someone from her past! I can't say who it is because I would hate to spoil the surprise but trust me it was the last person I expected. I'm not normally a fan of love triangles so I was a bit sceptical when the new guy first appeared on the scene but I have to say that it was handled really well and I actually found myself falling for the new guy right alongside Petra. To be fair I have a bit of a thing for dragon shifters so that was a big bonus in his favour!

I so badly want to talk more about the new guy and why I loved him so much but I'm wary of the fact that anything I say could end up turning into an unintentional spoiler. I'm just going to leave it by saying I loved how much he cared for Petra and although I could understand why she was so angry with the things he did in the past I was also able to see why he did it and forgive him for it. Petra is still a great heroine, she isn't the strongest person - especially compared to the supernatural creatures she is surrounded by - but she is brave and intelligent. I respect the fact that she always stands up for what she believes in, even when it gets her into trouble, and I admire her for her determination to try and stop the war.

Immortally Embraced was just as much fun to read as the first book in the series, the humour is fantastic and had me giggling to myself several times as I was reading. I also enjoyed the relationship development between Petra and the new guy and am now extremely curious to see what is going to happen in the final book, Immortally Ever After, which will be released in August. I honestly don't know if I want to see her end up with Galen or new guy which is very unusual for me - I tend to be quick to pick a side when it comes to love triangles! If you enjoyed the first book in the series then you're going to love this one just as much (even if you're not a fan of love triangles so don't let that put you off because this is far from your average one!). If you're new to the series then I would definitely recommend it if you're looking for a fun and light hearted paranormal romance that is full of humour, great characters and a nice amount of smut. I would suggest starting with the first book, Immortally Yours, though so you can get the most out of the ongoing storyline with the war between the old and new gods.