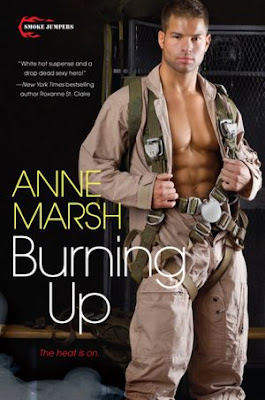 For Jack Donovan, smoke jumping is a way of life. He lives for the adrenaline rush--the thrill of flying over the burning California hills, the intensity of diving straight into the inferno, the glory of taming the forces of nature. Love is a distant ember compared to the feeling he gets fighting fires--until an emergency call from his hometown brings him face to face with the one woman he can't forget. . .

Lily never got over the handsome rogue who once kissed her senseless--and then left. She vowed she was done with love-'em-and-leave-'em men and small town life. Until a series of malicious fires set by a stalker has her running home to hide. Now, their summer is heating up as Jack fights to save her from the stalker's fiery threats and to convince her to give the passion between them a second chance.

Review:
Jack couldn't wait to get away from small town life and he loves his job as a smoke jumper more than anything. He's always been restless and the job makes sure he never has to spend too much time in one place which suits him perfectly. His adoptive mother Nonna is about the only person who could get him back to his home town so when she calls to tell him about a spate of arson attacks and begs for his help to keep the town safe he drops everything to help her. Lily was crazy about Jack when she was a teenager but he always felt she was too young for him so apart from one scorching kiss he kept her at a distance. She has only recently returned home hoping to get away from a stalker who was making her life a misery but it looks like the danger has followed her. Jack is determined to keep Lily safe and figure out who is making her life a misery and he needs to do it before they start a fire that puts the whole town at risk. As they give in to the passion they feel will Lily be able to make Jack realise that settling down wouldn't be so bad?

Burning Up is the first book in Anne Marsh's Smoke Jumpers series and introduces us to the three foster brothers who are at the centre of the books. Jack, Evan and Rio all had difficult childhoods (although we don't know each of their stories in detail yet) but have been inseparable since they met in the foster system. Their lives didn't improve until they were adopted though so although they have a strong bond with each other and their mother Nonna none of them find it easy to trust others or let anyone else in. They are all hard working, love the adrenaline rush of fighting fires and they run a successful business together organising teams of Smoke Jumpers who travel around the country to help wherever they are needed. I have to say I loved all of the brothers and I really enjoyed watching the banter between them and the rest of the firefighters. I'm definitely looking forward to getting to know Evan and Rio better when I get to read their books.

I really liked Lily's character, she is the kind of girl most of us would like to be friends with - caring, loyal and independent. She was forced to move back home after being terrorised for months by a stalker but she is happy to be back and excited about running the lavender farm she has purchased. She just wants to be able to live her life in peace and is working hard to build a successful business. I'll admit that Jack irritated me, he was very sexy but he came across as far too pushy and domineering for my liking. He constantly ignored Lily's wishes and did whatever he thought was best no matter how much she fought him on certain issues. I know he was trying to keep her safe but I'd have preferred him to spend time explaining why he felt things needed doing and waiting for her to agree rather than going ahead without her consent. Lily is a grown woman and had the right to make her own decisions which was something Jack didn't seem to believe and I found it hard to accept that someone as strong as Lily wouldn't tell him to get lost.

I also found Jack's constant mood swings about their relationship started to make me feel dizzy, one minute he couldn't live without her and would give up anything if only she'd take a chance on him and the next he was pushing her away and complaining that he didn't want to settle down and be stuck in one town forever. I wouldn't have minded a bit of internal conflict but it just went on and on until it became a bit much. I think I would have understood him better if we'd been given a bit more insight into his past before he came to live with Nonna, we could see the effects of serious childhood trauma but didn't learn about the cause of them. I was desperate to know why he felt so claustrophobic sleeping inside. He does manage to redeem himself by the end of the book but I never fell for him as hard as I usually fall for my romance heroes.

I really enjoyed the scenes where Jack and his team were battling fires, they were well written and showed just how dangerous the job of smoke jumping is. I have a huge respect for all firefighters (my step dad was one until he retired so I've grown up knowing just how hard they work) but living in the UK I have very little experience when it comes to the huge forest fires that cause such devastation in other parts of the world. The scenes with Lily's stalker were interesting and I thought the escalation in his behaviour was realistic but I felt it was all just a little too easy to figure out who they actually were. I could have done with a little more mystery there and would have loved a few red herrings thrown in along the way.

I have to confess that I didn't love Burning Up as much as I hoped I would but it was still an enjoyable way to pass the time and I'm definitely planning on reading Evan's story in Slow Burn. I'm hoping that the few of the issues I had with this story will have been ironed out and the next book will be much stronger. Either way I'm looking forward to seeing more of Evan and I hope that Rio will be getting his own book after that one.