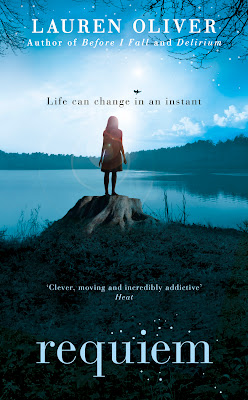 Battling against a society in which love has been declared a disease, Lena now finds herself at the centre of a fierce revolution. But the Wilds are no longer the haven they once were as the government seeks to stamp out the rebels. And Lena's emotions are in turmoil following the dramatic return of someone she thought was lost forever...

Told from the alternating viewpoints of Lena and her best friend Hana, Requiem brings the Delirium trilogy to an exhilarating end and showcases Lauren Oliver at the height of her writing powers - emotionally powerful and utterly enthralling.

Review:
Please note that while this review does not contain spoilers for Requiem it will talk about major events in Delirium & Pandemonium so please don't read any further if you're new to the series. Consider yourselves warned!

Requiem picks up Lena's story right after the ending of Pandemonium, she is still living in the wilds and helping plan the rebellion but life is becoming more and more difficult for the rebels. The society is becoming more organised in their plans to kill the resistance and they have started to bring the war into the wilds. With soldiers killing anyone they come across in the wilds and burning down any remaining buildings they find it isn't going to be easy for Lena and her friends to survive, let alone for them to plan future attacks. At the same time we also get to follow Lena's best friend Hana's story. Hana has been cured and is living a life of luxury inside the city while she prepares to marry the new mayor. Hana's life should be perfect but she is worried that the cure hasn't been fully effective. She also has questions about her future husband and whether he is really the man she thought he was.

I absolutely loved Delirium, I'll admit was a little upset with the direction the story took in Pandemonium but the shocking ending more than made up for that so I couldn't wait to read the final book in the trilogy. Now that I've read it I find myself left with mixed feelings about Requiem. I'm not really sure why but the first half of the book felt incredibly slow moving, it was only Lauren Oliver's beautiful writing that kept me reading. The last third of the book was fantastic though, once Lena and Hana's stories started to merge together things really took off and I was holding my breath in anticipation of what was going to happen. It isn't enough to tell you I was gripped, I just don't even have the words to describe how caught up in the story I was.

I was so excited by Alex's return, that was something I prayed for throughout the whole of Pandemonium so I couldn't have been happier with his shock appearance. What I wanted to see most in Requiem was more of Alex, I was never a huge fan of Julian so I wanted Lena back with Alex and for the pair of them to work things out. Alex was understandably going to be upset to see that Lena had moved on while he was gone but it was obvious that her feelings for Julian were nothing like her feelings for Alex. It's funny because I think I actually missed Alex more in this book, where he was there but not really there because he was acting so cold and distant, than I did in the last book where he only appeared on a couple of pages! Lena doesn't spend much time with Alex because he pushes her away but she doesn't really spend much time with Julian either. A lot of the time Lena is just sitting around trying to decide which boy she likes most and who she should be with which I found frustrating and a bit boring if I'm honest. I'm just so over books with love triangles, especially ones where it is so obvious who the main character really wants to be with.

I did find it interesting to have the two completely different points of view though (although I would have loved a few chapters from Alex's POV thrown in for good measure!). It allowed us to see both what was happening in the wilds and inside the city and it made it clear that neither side was completely right in their actions. I have never been a big fan of Hana because I felt she was spoilt and selfish, especially after the way she betrayed Lena, but I actually started to understand where she was coming from a little better through reading her POV. I still don't think her actions were excusable but at least she tries to make up for it and I think she has come to realise that she shouldn't have behaved in the way she did. I even found myself feeling quite sorry for her at times, as much as her life looks perfect from the outside it really wasn't as good as it seemed and she was surrounded by some very nasty characters who made it quite clear that if she didn't act in the way she was supposed to then they considered her expendable. I felt she was quite brave to investigate what was going on in spite of the risk to her life.

Overall I have to say that Requiem wasn't my favourite book in the trilogy but it is still full of the beautiful writing that I've come to expect from Lauren Oliver and I'm glad to know how the series ended. Lauren has left things quite open which I know some fans will love because it will allow them to decide in their own minds what happens next. Personally I prefer a more complete ending, possibly because I lack the imagination to create my own in as much detail as I would like, but I do have a very clear idea about how I would tie up a couple of situations! If you're a fan of this series then you won't want to miss this one and if you buy the UK hardback it also includes a short story from Alex's POV at the end. I'm never going to complain about spending more time with Alex even if it was hard to hear about all the things he went through after he was shot and locked up in the Crypts! I'm still a huge fan of Lauren Oliver and I'm looking forward to seeing what she comes up with next.

Source: Received from the publisher via Edelweiss in exchange for an honest review, I was also sent a print copy by Hodder & Stoughton.