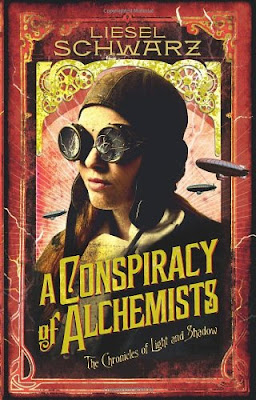 When dirigible pilot Elle Chance accepts an unusual cargo in Paris she finds herself in the middle of a deadly war between the Alchemists and Warlocks.

The Alchemists will stop at nothing to acquire the coveted carmot stone and its key, and Elle must do everything in her power to thwart their diabolical plans.

Embarking on a perilous cross-continental adventure with the mysterious Mr Marsh, Elle is forced to question everything she ever knew about herself to fulfil her destiny and prevent a magical apocalypse . . .

The Chronicles of Light and Shadow:
A Conspiracy of Alchemists
A Clockwork Heart

Review:
Elle is not your average young lady, she isn't interested in ball gowns or finding the perfect husband and would much rather be independent. She loves to fly and ever since training as a dirigible pilot she has enjoyed travelling across Europe in the ship she is so proud of. When she is employed to carry a mysterious item from Paris back to London she suddenly finds herself caught up in a battle between the Alchemists and Warlocks. Both sides are determined to get hold of her cargo and they will stop at nothing to make sure they come out on top. Elle is forced to join forces with her employer Mr Marsh to prevent the end of the world as she knows it but the deeper she is pulled into the upcoming war the more she starts to discover about her own past and realise that her future will never be the same again.

A Conspiracy of Alchemists is a fantastic steampunk adventure story that will take readers on a journey across Europe, taking in Oxford, Paris, Venice and Constantinople by both air and by train. Liesel Schwarz has created a detailed world where the human realm is closely connected to the realm of shadows, a world that is filled with alchemists, warlocks, nightwalkers and even absinthe fairies who live amongst the human population. This was such a fun story to read and you never knew quite what the author would throw at you next which kept me on my toes as I was reading.

Elle was a great character, I love stories about strong women who aren't afraid to stand up for what they believe in. Elle is a woman of science, she loves to learn and as the daughter of a prominent scientist she has inherited his love of physics. She is also very practical and is able to turn her hand to any technical gadget she comes across. One thing she doesn't believe in is magic, she is much more interested in things that she can see and prove with science. She has no interest in the world of alchemists and warlocks until she is dragged into the whole mess against her will. Elle doesn't have much choice other than to work with Marsh but that doesn't mean she is going to blindly put her trust in him, he is going to have to prove himself to her as they get to know each other better. I liked the way that Elle refuses to just accept what she is told, she needs to find ways to prove things for herself and you have to admire the way she so stubbornly clings to her beliefs.

Marsh has to be my favourite though, he is a complex character who has a lot of secrets and it takes a long time for Elle to start to get to the bottom of them (in fact I'm pretty sure he has plenty of surprises still to come as the series continues). The deeper you dig into Marsh's background the more you start to understand why he has such a hard outer shell and why he plays his cards so close to his chest. As he gets to know Elle you really start to see a softer and more protective side to him and I loved the slowly developing romance between them.

The romance is just a small part of the story though and the plot is focused on the animosity between the alchemists and the warlocks. I loved the detailed descriptions of the various settings throughout the book, it was easy to picture yourself flying alongside Elle and Marsh in her dirigible or sitting next to them on the Orient Express but it was the towns that the author brings vibrantly to life. Although I'm glad to learn that this is the start of a series I'm happy to say that the story did work well as a stand alone. I'm sick to death of series that end on such major cliffhangers that you don't even feel like you've read the whole book so it was nice to see an ending so well handled. If you enjoy steampunk or fantasy stories then I'm sure you're going to love A Conspiracy of Alchemists, it's an impressive debut and has left me excited to read more from Liesel Schwarz in the future.