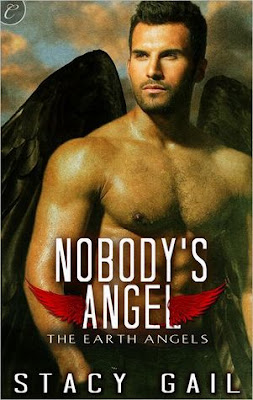 Investigative journalist Kendall Glynn is horrified when a friend and colleague signs off permanently during a live newscast, jabbing a pen into his jugular. Kendall's no expert, but judging by the strange white veil in the anchorman's eyes, she would swear he was a man possessed.

A descendant of the accursed Nephilim, Zeke Reece prowls San Francisco by night, keeping the city free from paranormal phenomena. But even he is no match for whatever malevolent force is behind a recent rash of murder-suicides. And when a beautiful tenacious reporter becomes the next target, Zeke has no choice but to stay close to her, until he can find the evil spirit and cross it over.

The closer Kendall gets to the truth, the more danger she's in. Fortunately, a sexy and mysterious masked stranger keeps swooping in to the rescue. Kendall's life depends on finding who or what is responsible for the killings, before it finds her.

Review:
When reporter Kendall watches her friend and colleague kill himself on live TV she knows something strange is going on. Even if she hadn't seen a strange sheen to his eyes before it happened there is no way she will believe that the man she knew would act in such a crazy manner. Her investigative instincts kick in and she is determined to uncover exactly what happened to him and see if there is a link between his death and a recent spate of murder/suicides. Zeke is a descendant of fallen angels who spends his time protecting the inhabitants of San Francisco from ghosts and other paranormal creatures. He was already tracking the entity that caused the death of Kendall's friend but now she has put herself in harm's way he knows he is the only one who can protect her. As the danger increases so does the attraction between them but can Zeke keep Kendall safe long enough for them to stop whatever is causing the deaths?

Nobody's Angel is the first story in Stacy Gail's new Earth Angels series and it gets things off to a great start. At around 90 pages it is a fairly short story so I do still have some questions about the world and the mythology but I still really enjoyed it and am looking forward to learning more as the series continues. I really enjoyed the romance between Kendall and Zeke but I did find myself wishing for more pages because I'd have liked their relationship to have developed a little more slowly. I'm glad to see that the next book in the series is much longer (about 170 pages) though and I can't wait to pick up Savage Angel.

Kendall is a strong and intelligent woman who is determined to find out what is really happening in her town. She is brave enough to go after forces that she doesn't understand but she isn't too stupid to accept help when she realises that she needs it. Zeke is part paramedic, part superhero and all sexy alpha male! During the day he works as an EMT, in fact he first meets Kendall when he treats her injuries after her friend's death, but at night he dons a mask and cloak to protect the city from ghosts and other paranormal beings. Zeke definitely has the sexy superhero vibe going for him and I can't deny developing a bit of a crush. I've already mentioned that the romance develops fairly quickly between them but I found myself really enjoying the banter between them and the way Zeke tries to keep his identity a secret from her.

Nobody's Angel has a bit of everything - interesting mythology, action and fight scenes and a fun romance. There is a lot going on in those 90 pages! I'm looking forward to continuing the series and spending more time in the world Stacy Gail has created. If you're looking for a fun, hot read that you can devour when you have limited reading time then this is perfect and I'd definitely recommend giving it a try.