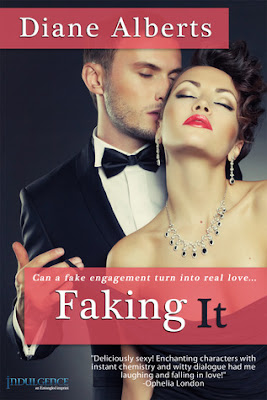 Derek Rory never meant to propose to his best friend's little sister. But when her boss tells a family-oriented investor he's Stephanie's fiancé, Derek can either play along or let her get fired. He's hardly one to turn away from a damsel in distress. If only that damsel wasn't adorable and sexy with a laugh that could melt any cold business mogul’s heart.

When a business proposal becomes a marriage proposal, Stephanie Miller tries to keep it strictly boardroom. But when things get hot under the table, it's all they can do to stay apart. As the tangle of lies drags them deeper into the underhanded world of business politics, Stephanie finds herself in over her head—not just with her job, but with her "fiancé." His eyes are cold, but his kisses light her on fire. If she's not careful, she'll end up faking her way into a real romance.

Review:
Stephanie has three older brothers who have spent their entire lives protecting her, she loves them dearly but is determined to finally stand on her own two feet. She is desperate to do well in her temping job in the hope that she will get a full time contract out of it but most importantly she believes in the project she is working on knowing it will help hundreds of needy families if she can pull it off. When her boss insists on her posing as Derek's fiancée to lure in an important investor it goes against everything she believes in but she doesn't have much choice unless she wants to risk losing her job. Derek is best friends with Stephanie's brother Aaron and he can't let her get fired when helping is a simple matter of spending time with her. As much as he is attracted to her she's Aaron's little sister and there are some lines that you should never cross but the more time they spend together the harder it is to remember that their relationship is supposed to be fake.

I loved Diane Alberts' book Try Me and have been looking forward to reading more of her work ever since so when I was offered a review copy of Faking It I jumped at the chance. I'm happy to say I loved Faking It even more and Diane Alberts has definitely earned a place on my list of must read authors, I'm very much looking forward to starting to work my way through her back list. I absolutely love the humour she injects into her stories and the way she creates such realistic characters.

Stephanie is a fun loving young woman who is also a walking disaster, if anyone is guaranteed to trip over their own feet it will be her and that trait gets her into some quite amusing situations! She comes from a loving and protective family but wants to prove to her brothers (and to herself) that she can manage on her own. I loved her for her independent streak and the way she doesn't automatically think of Derek as a meal ticket. She is willing to go along with the pretence that they are engaged but she doesn't want him to get involved in her pitch to the investor even though he has a lot more experience than she does. Derek couldn't be more different, he is very buttoned up and after a difficult childhood he has spent his adult life unconsciously looking for his father's approval. He has his emotions locked up tight but that doesn't mean he isn't a passionate man, he just needed the right woman to bring out his impulsive and romantic side. I absolutely loved seeing the effect that Stephanie has on him, the fact that the story is told from both of their points of view really allows us to get inside his head and see what he is feeling and it was wonderful to read.

Faking It was the perfect feel good romance that had me smiling and giggling to myself all the way though. Stephanie and Derek have fantastic chemistry and this is definitely a case of opposites attract. What I liked most was the way Stephanie helps to bring Derek out of his shell though, she helps him be the man he always wanted to be and that made my heart melt. I also have to confess to developing a huge crush on Stephanie's brother Aaron, I can't tell you how excited I was when the author confirmed via twitter that she will be writing his story! This is a series I can't wait to continue and I can't recommend Faking It highly enough to contemporary romance fans.