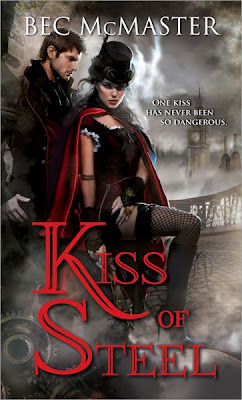 When Nowhere Is Safe

Most people avoid the dreaded Whitechapel district. For Honoria Todd, it's the last safe haven. But at what price?

Blade is known as the master of the rookeries—no one dares cross him. It's been said he faced down the Echelon's army single-handedly, that ever since being infected by the blood-craving he's been quicker, stronger, and almost immortal.

When Honoria shows up at his door, his tenuous control comes close to snapping. She's so...innocent. He doesn't see her backbone of steel—or that she could be the very salvation he's been seeking.

Review:
Since the death of her father Honoria has had to work hard to provide for her siblings and keep her family together. Desperation has brought them to the seedy Whitechapel district where she hopes they can remain hidden from the prying eyes of the Echelon but instead they catch the attention of Blade, the undisputed master of the rookeries. Blade knows everything that happens in Whitechapel and he knows exactly who Honoria is and why she is hiding. He offers her his protection but it could come at a price she isn't willing to pay. How much is Honoria really prepared to sacrifice for her freedom and the safety of her siblings?

Kiss of Steel is a fabulous historical paranormal romance with a side order of steampunk and it makes for a great start to the London Steampunk series. It has a dark and gritty feel to it that reminded me of Kristen Callihan's Darkest London series (another series I'd highly recommend although that one doesn't include the steampunk elements). The story is heavily focused on the romance which meant the world building wasn't quite as strong as it could have been but I still thoroughly enjoyed it. There were times when I found myself a little confused about the difference between blue bloods, the Echelon and actual vampires but I think I got it all straight in my head by the end of the book. I've come to expect a little confusion at the start of a new series when I'm getting to grips with a new world so that didn't bother me too much and now that the rules have been established I think the series will just continue to get stronger with each instalment. Even though the romance plays a heavy role in the story there were still plenty of other things going on and I found it very difficult to put the book down because I just had to know how everything was going to play out.

One of the main strengths of this book was the characters, I was able to respect Honoria for the way she is so fiercely protective of Lena and Charlie (her sister & brother). She will do whatever it takes to make sure they are safe from the reaches of the Echelon who would just take them as blood slaves. Honoria is smart, strong and unwilling to back down without a fight. She may be down on her luck but she isn't broken and she has too much pride to go begging. Blade is the kind of alpha we've come across many times before in paranormal romance but that didn't stop me falling for his charms. He has a bad reputation but underneath it he is a decent guy who just wants to be left alone to live his life as he sees fit. He has a small group of friends who are incredibly loyal but he has earned their trust and he would give his life to keep them safe. I enjoyed the flirty banter between Blade and Honoria and loved the way their relationship develops throughout the story as she slowly learns that she can trust Blade to help her and her siblings.

Alongside the main characters we have been introduced to an interesting group who will each get to take their turn centre stage in future stories and I'm looking forward to getting to know them all better in as the series continues. If you enjoyed Kiss of Steel then make sure you read the follow up novella Tarnished Knight which is currently available to read for free on Bec McMaster's website and fits into the time line between this book and Heart of Iron (due to be published in May). I'd recommend Kiss of Steel to fans of historical and / or paranormal romance, you don't have to be familiar with steampunk to enjoy the story and this could be a good gateway book for people who enjoy PNR and have yet to test the steampunk waters. This is a series I definitely plan to continue reading and I can't wait to see where the journey takes us next.