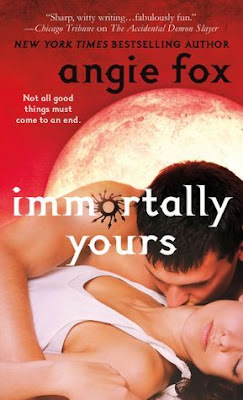 IN THE WAR BETWEEN THE GODS...

No one patches up the incoming wounded like Dr. Petra Robichaud. Recruited by the gods for her uncanny medical skills, she’s the best M*A*S*H surgeon in the army. Along with a nosy guard sphinx,vegetarian werewolf, and other paranormal paramedics, she bandages soldiers who are built like Greek gods (literally). But when one sexy immortal ends up on her operating table—half dead and totally to-die-for—Petra’s afraid she’ll lose her patient and her heart...

NOTHING IS MORE DANGEROUS THAN LOVE

Commander Galen of Delphi is one gorgeous but stubborn demi-god. When his spirit tries to slip out of his fatally wounded body, Dr. Petra has to slip it back in—unwittingly revealing her ability to see ghosts. Now that Galen knows her secret, he’s convinced she’s part of an ancient prophecy. If the oracles are right, Petra could lead Galen’s army to peace. And if he seduces her on the way to hell and back? Heaven knows—all’s fair in love and war...

Review:
With war raging between the old gods and the new gods humanity is caught in the crossfire and if you are chosen to join one of the armies then there is no escaping. Dr Petra Robichaud was recruited by the new gods to serve as a medic and it is her job to patch up the soldiers and get them back to the front lines as quickly as possible. When Commander Galen of Delphi ends up nearly dying on her operating table Petra risks all to save him. Galen survives but he is convinced that Petra is the subject of an ancient prophecy and that she could bring peace and end the war the gods have been raging for hundreds of years. Is Petra brave enough to risk her life again for the chance of peace? As Galen wins her heart and heads back to the front lines can she afford not to?

I have heard great things about Angie Fox's Demon Slayer series and have had the first book on my wish list for ages so when I was offered a review copy of the first book in her new series I jumped at the chance of reading Immortally Yours. Anyone who has ever seen an episode of the old TV series M*A*S*H will recognise the kind of setting for the story - a mobile military hospital where the doctors are working out of tents and without access to all the latest technology. You'll also recognise the kind of humour between the staff, the way they are constantly trying to play pranks on the base commander and each other. Throw in a plethora of different paranormal creatures, each with their own quirks and you're in for a hilarious read. This is the kind of book that you pick up and start reading and can't help but wonder why nobody has come up with the idea before. Luckily Angie Fox now has and we get to enjoy the results!

Petra is a great main character, as a human she is physically weaker than those around her and the idea of being the person mentioned in the prophecy terrifies her. The last thing she needs is the weight of the world upon her shoulders, especially when she has a secret that if revealed will mean an instant death sentence. I loved the way Galen was so determined to get her to admit her ability - almost as determined as she was to hide it. The way she tried everything in her power to avoid him in spite of the attraction between them and the way things kept conspiring to throw them together was hilarious. Galen was very much an alpha who wanted to take control of every situation but Petra didn't make it easy for him and I really enjoyed the will they / won't they chase before anything happened between them. It was also great to see the relationships between Petra and her other co-workers but particularly her room mates, werewolf Rodger and vampire Marius. Conversations between the three of them never failed to make me laugh out loud.

Although Immortally Yours is set in a supernatural battlefield with the doctors constantly battling to save the lives of seriously injured soldiers the tone of the story is actually quite light hearted. The humour in the story is more than enough to lighten the tone and barely a page went by without me chuckling to myself as I read. I had already heard that Angie Fox writes great feel good and amusing paranormal romances and that has certainly been proved correct with this book. I can't wait to pick up the next book in the series but this has also made me even more keen to check out her previous stories.Whether you're a fan of the M*A*S*H TV series or not if you're looking for a paranormal romance that will make you laugh out loud then this is well worth reading. If you want to get a feel for the story check out the Paranormal News Network website created by the author based on the news program the camp watch to find out the latest news about the prophecy.