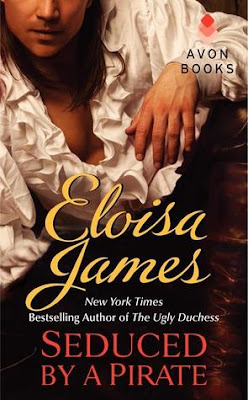 Sir Griffin Barry leapt out of the bedchamber window at age seventeen after a very disappointing wedding night, drank a bit too much at the pub and woke to find that he'd joined the crew of a pirate ship! Years later, he has become one of the most feared pirates on the high seas, piloting the Flying Poppy, a ship he named after the wife whom he fondly (if vaguely) remembers.

What happens when a pirate decides to come home to his wife - if she is his wife - given that the marriage was never consummated? And what happens when that pirate strolls through his front door and is met by . . . well, that's a surprise!

Happily Ever Afters Series:
A Kiss at Midnight
Storming the Castle (Novella)
When Beauty Tamed the Beast
Winning the Wallflower (Novella)
The Duke is Mine
The Ugly Duchess
Seduced by a Pirate (Novella)
Once Upon a Tower (2013)

Review:
I love this series and have enjoyed all of the previous companion novellas but I have to admit that I was nervous about picking up Seduced by a Pirate because I didn't enjoy The Ugly Duchess as much as the previous novels. Thankfully I enjoyed the story a lot more than I expected to even though it has the same issue of a cheating hero as The Ugly Duchess did.

I think that the cheating issue bothered me less this time around because Griffin didn't claim to have been in love with his wife before he left. In fact, they only met at their wedding and Griffin was so intimidated by his beautiful and slightly older bride that he was unable to consummate their vows. By the next day Griffin is out of the country and he doesn't see his bride again for 14 years. Now, I still don't think that excuses his cheating or the fact that he didn't come home to her sooner but it did make me find it a bit easier to forgive him for it. Particularly when he is willing to accept that Phoebe cheated on him and had three children while he was gone! I don't want to say too much about the story because it is always too easy to spoil a novella but I found myself giggling out loud at the misunderstandings between the couple as I was reading.

As a short story this has a satisfying ending, I did feel that Phoebe goes from wanting an annulment to the marriage to trying to seduce her husband a little too quickly though. I also felt that she forgives him a bit too easily for spending the last 14 years away from her but at least he had let her know that he was still alive and had been providing for her financially while he was away which is more than can be said for James in the last book. I find it easier to forgive things moving too quickly when I'm reading a novella because I know that the author doesn't have as much time to go into as much depth that I'd expect from a full length novel.

Seduced by a Pirate is a fun and entertaining read that is sure to appeal to fans of this series. It's perfect for reading in one sitting and left me looking forward to reading Once Upon a Tower when it publishes next year.