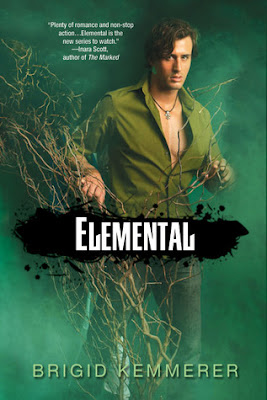 Earth, Fire, Air, Water – they are more than you dream.

As an air Elemental, 17-year-old Emily Morgan doesn't have much power. That’s okay—she knows what happens to kids who do.

Like Michael Merrick. He’s an earth Elemental, one with enough power to level cities. Which makes him sexy. Dangerous. And completely off limits. At least according to Emily’s family.

But her summer job puts her in close contact with Michael, and neither of them can help the attraction they feel. When forces of nature like theirs collide, one misstep could get someone killed. Because Emily’s family doesn't just want her to stay away from him.

They want him dead.

Review:
Elemental is a short story set five years before events in Brigid Kemmerer's debut novel Storm. It may only be a short story but it worked well as an introduction to the series and definitely left me keen to pick up Storm as soon as possible.

The story introduces us to powerful earth elemental Michael and air elemental Emily. Michael is so powerful that the other elemental families fear his abilities and worry that he could expose them all, they are so frightened of him that they would prefer to see him dead than let him live his life. Thanks to a deal made by his parents Michael is safe for now but only if he keeps to the conditions that his family agreed to. He doesn't want to cause trouble but the other elemental families will do anything to provoke him into breaking the truce. Emily's family have always warned her to stay away from Michael, in fact they have banned any kind of contact with him, but when they are thrown together due to circumstances out of their control the attraction between them is hard to resist.

I really enjoyed Elemental and am looking forward to continuing the series. We haven't been told much about the different elemental abilities yet so I can't wait to learn more. My main complaint about this story is that it ended on such a cliffhanger and from what I understand the story isn't picked up immediately in Storm. In fact Storm is about Michael's younger brother Chris so I'm a bit worried we won't get a full resolution to the events in Elemental. I am however looking forward to getting to know Michael's family better and I hope that we see more of him and Emily throughout the series.