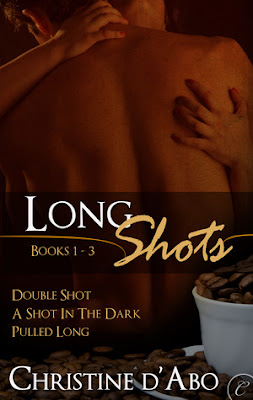 Welcome to Pulled Long café, where the coffee is hot, and the sex is hotter! Meet your hosts:

Sadie Long has been lusting after her friend Paul for years, and when she visits him at Mavericks, the sex club where he works, she's suddenly fantasizing about being with Paul and his sexy boss Josh—at the same time.

Paige Long can't help but be attracted to gorgeous firefighter Carter, especially once she learns he's a Dom. But can she trust in her own desires and submit to happiness?

Ian Long doesn't want to be the rebound guy for a brokenhearted man—even after a little exhibitionist play with Jeff satisfies desires he didn't even know he had...

These novellas are also available separately 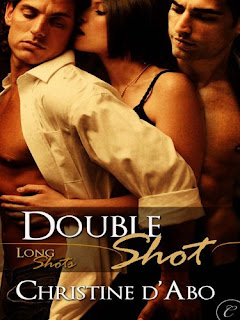 Paul has always wanted Sadie, but never thought she'd see him as anything more than a friend. On the night of the party, he and Josh tempt Sadie to reveal her deepest desire--a desire both men are eager to help fulfill.

Giving in to her sensual side, Sadie enjoys a night of mind-blowing sex. But in the light of day, will she lose Paul as a friend, or gain him as a lover?

Review:
Double Shot is a great introduction to the Long Shots series and left me keen to spend more time with the Long siblings. This is the story of middle sister Sadie who is the one in charge of the kitchen of the family cafe and catering business that they run together. We are also introduced to older sister Paige who is in charge of the business side of things and their younger brother Ian who is the coffee genius. Compared to her siblings Sadie has always considered herself the quiet one, she is happy to watch from the sidelines as they seek out the attention with their outrageous antics. Sadie has been friends with Paul for 10 years now and although she has always been attracted to him she has never even dreamed that he might share her interest. But when Paul hires her to cater an event at the exclusive sex club where he works things quickly start to heat up between them. Paul offers to help her fulfil her wildest fantasies but will Sadie dare to take a chance when she risks losing her best friend?


A Shot in the Dark 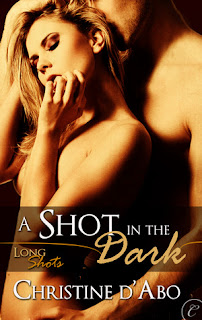 Carter is one of the hottest men ever to walk into Paige Long's coffee shop. The attraction is mutual, and when Carter reveals himself to be a Dom, the submissive in Paige is aroused. Yet she brushes him off—her last relationship was abusive and she's unwilling to get involved with another Dom.

But when Carter returns the next day—in his firefighter uniform—Paige's fantasies really heat up. She can't resist his offer to get to know him over a drink at Mavericks, a local sex club. Their conversation quickly escalates to a session in one of the private rooms, and Paige is both thoroughly satisfied by Carter's skills in domination, and impressed with his selflessness as a lover.

Paige is ready to move on with her life. But can she trust in herself and submit to happiness?

What is better than a hunky firefighter? A hunky, Dominant firefighter who swaps his uniform for leather when he's not working! Yes, Carter is one HAWT guy and that makes Paige a very, very lucky woman. Paige has been through a lot and it has left it's toll on her, she finds it hard to trust anyone and because she is denying part of herself she is no longer comfortable in her own skin. She is attracted to Carter but it takes a lot of guts for her to risk attempting a scene with him and you have to admire her for having the courage to try. Carter is a perfect Dom, he can see how damaged Paige is but he knows exactly what she needs and how to give it to her. He puts her needs above his own and works at earning her trust so that she feels comfortable with him. If you're looking for a quick read with hot sex and a little light spanking then A Shot in the Dark will fit the bill perfectly, this was a great addition to the series and one I'd recommend to fans of erotic romance. 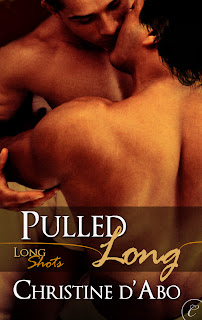 For months, coffee shop owner Ian Long has fantasized about a customer he knows only as "Blue Eyes." Until he learns Blue Eyes is in the midst of a divorce—the last thing Ian wants is to be the rebound experiment of a straight guy. Giving in to lust, he invites the man into the cafe after hours and they indulge in a little exhibitionist play, but Ian is unwilling to get involved.

Jeff makes it clear he’s interested in more than just sex. He wants to go public with their relationship in more ways than one. But can Ian open his heart, when he fears it will be broken?

Ian is such a fabulous character, he cares deeply for his sisters and works incredibly long hours to take the pressure off of them so that they can enjoy their new romantic entanglements. He has been drawn to Jeff (Blue Eyes) since the moment he first saw him but after finding out that Jeff is currently going through a divorce he refuses to act on that attraction. Ian has been hurt in the past and doesn't want to be anyone's rebound guy - especially not someone who is straight and will only end up breaking his heart to go back to being with women. Jeff on the other hand knows that Ian is the person he wants to be with and he is determined to prove it.

Without a doubt Pulled Long is a HOT read, not only are Ian and Jeff crazy about each other and unable to keep their hands to themselves but they both have an exhibitionist streak and enjoy both watching others and being watched. This leads to some very steamy scenes at Maverick's sex club that certainly raised my temperature while I was reading! Christine d'Abo definitely knows how to write good erotic romance and I can't wait to read more of her work starting with the next book in this series Calling the Shots which stars Maverick's owner Josh who I have been crushing on since Double Shot, I have a feeling his story is going to be a good one!