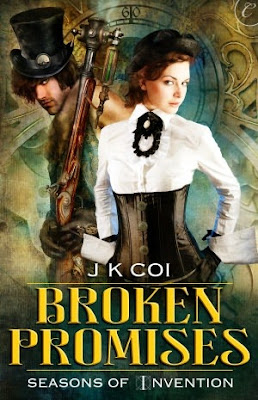 Former ballerina Callie Carlisle is determined to rebuild her life with her new mechanical limbs. She's just learned to accept the enhancements that saved her from certain death when she experiences uncontrollable twinges and flashes of light that obscure her vision. Terrified of literally falling apart, she resists telling her husband. Jasper's already vowed to keep her out of harm, and she doesn't want to worry him further.

When the War Office's General Black arrives with an urgent mission—rescue the doctor who created Callie's enhancements—she has no choice but to accept. A rogue agent and former patient of the scientist believes the biomechanical modifications he received are killing him, and he's out for revenge.

Callie must reach the doctor before it's too late. But with an overprotective Jasper at her side, and her alarming symptoms getting more frequent, will she be able to hold herself together long enough to save the doctor...and herself?

Seasons of Invention Series:
Far From Broken (Novella) (Available separately or as part of the A Clockwork Christmas anthology)
Broken Promises

Review:
I really enjoyed J.K. Coi's novella Far From Broken when I read it last year but at the time I had no idea that it was the first book in a series. So you can imagine my excitement when I saw that her latest release Broken Promises featured the same main characters Jasper and Callie. When we first met Callie she had undergone extensive surgery to save her life after she had been horrendously tortured by Jasper's enemies. With a new mechanical eye, hand and legs Callie lost her identity as the world famous ballet dancer and it took a long time for her to come to terms with what happened to her. Jasper blamed himself for the fact that she was tortured and it wasn't easy for the couple to forgive themselves and each other for the events that had occurred.

As much as the couple have promised that there will be no more secrets between them Callie finds herself suffering strange symptoms in her mechanical limbs and worries that there is something seriously wrong with her. She doesn't want to tell Jasper because she doesn't want to worry him and decides her best course of action is to contact the doctor who created her limbs. Jasper is determined to keep Callie away from the war office, his work for them was the reason that she was tortured in the first place, but since they paid for the cost of her treatment they seem to think that they now own her. What Jasper doesn't realise is that Callie wants to find a way to be useful, she has lost all of the things that made her who she was and she needs something to anchor herself in her new life.When the Doctor responsible for Callie's implants goes missing the couple's first mission is his rescue but as the secrets and lies build up between them can their relationship survive the task?

If you enjoyed Far From Broken then you're going to love this latest instalment of the couple's story. Callie is such a strong character and someone it is very easy to feel for. In spite of everything she has been through she is determined to make the best of her new life and to do something positive, it would be easy for her to wallow in self pity but ever since she came to terms with what happened she hasn't let it beat her. Jasper is incredibly over protective of his wife which is understandable considering what happened to her previously but it doesn't make it easy for her to get on with things. They are such a sweet couple but the misunderstandings between them threaten to tear them apart and it is very easy to see things from both of their perspectives. I have high hopes that we haven't seen the last of this couple and I'll be keeping an eye out for more from J.K. Coi in the future. If you're a fan of steampunk and romance then I'd highly recommend giving this series a try.