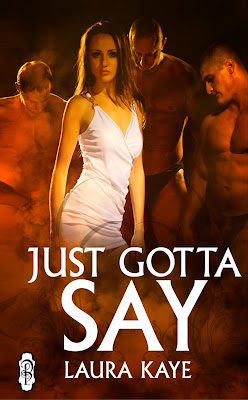 Callie Davis stumbles upon two of her three male roommates in a surprising, molten-hot midnight tryst and discovers a side of herself she never knew existed. Desire to play with them grips her, and she can’t stop fantasizing about having multiple men, particularly her three long-time best friends.

As three strong sets of hands caress and undress her, Callie surrenders to desire, because sometimes you just gotta say...yes.

I have to tell you Just Gotta Say was hilarious, the scene where the boys walk in on Callie had me in stitches and I could practically feel the heat of Callie's blushes as she prayed for the ground to swallow her. I don't think I've ever laughed so much reading an erotic novella but that doesn't mean the story isn't Hot with a capital H. I loved how different all three of the guys were and found it almost impossible to pick a favourite out of them. The way the three of them all cared so much about Callie was adorable but they also care about each other and don't want to step on each others toes. I really liked the fact that they discussed things between them before offering to make Callie's fantasies come true to make sure they knew how they wanted things to pan out in the future.

I don't want to say too much more but if you enjoy ménage stories and like reading about friends with scorching hot chemistry then you'll love this one. Another fabulous story from Laura Kaye and I can't wait to read more of her books!