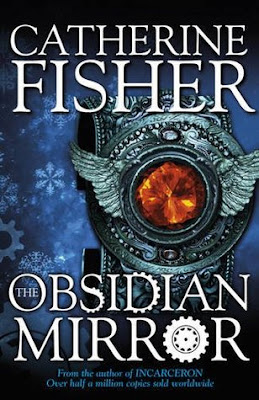 Jake's father disappears while working with the obsessive, secretive Oberon Venn - and Jake is certain Venn has murdered him.

But what he finds at the snow-bound Windercombe Abbey is far stranger.

A mysterious black mirror.
A hidden diary of lost secrets.
A tribe of supernatural beings who haunt the woods.
A girl pursued by a wolf of ice.

There are life-threatening choices at every turn. But Jake won't stop til he knows the truth . . .

Chronoptika Series:
The Obsidian Mirror
Titles & release dates for future books in the series are to be confirmed

Review:
When Jake's father disappears while working on a secret project with his best friend Oberon Venn Jake becomes convinced that Venn must have killed him. Now Jake is determined to prove that and find a way to make Venn pay but on arriving at Venn's remote estate in Devon he uncovers secrets that will change his life forever. Everything comes back to the mysterious obsidian mirror that Venn is convinced can open pathways into the past. Venn needs Jake's help to find his father who was lost in time when an experiment with the mirror went horribly wrong. But Venn isn't the only one who is obsessed with the mirror and as various strangers close in, each with their own very different motives, Jake finds himself caught in a life and death battle. Which of his new acquaintances can he trust and who is going to figure out the secrets of the mirror first? Is it even possible to find Jake's father and bring him home?

The Obsidian Mirror is a story that you need to devour slowly, the plot is told from multiple perspectives and blends the past, present and future in a way that sometimes leaves you unsure which way is up. It can be confusing to work out what the character's motivations are and why the do the things they do but if you stick with it you will quickly find yourself absorbed in trying to unravel the clues. Just when you think you are on the verge of an important discovery Catherine Fisher will throw something else at you that turns everything on it's head. I love it when a book can surprise me and this one certainly managed that!

Anyone who is interested in time travel or who enjoys reading books with a strong sense of mystery will love The Obsidian Mirror. Add in elements of fantasy with the Shee (or fairies) and even a wolf who tracks time travellers for his mysterious owner and you're in for a treat. I don't want to say much more because this is a book you need to go into with no expectations about the story - I would hate to ruin the journey by giving away a spoiler. Instead I'm going to end this review by saying that this is a great start to a new series and it's one that has me excited to see what happens next to Jake, Venn and the various other characters who surround them. Oh and can someone please send Piers in my direction - I really have a craving for a batch of his cookies!