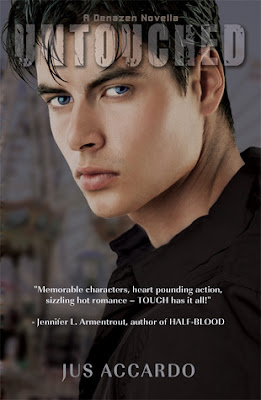 Until he met Dez, Kale’s days were filled with violence and death. He was used as a weapon of destruction by the power hungry men of Denazen. He’s a Six. A person with an abnormal ability. Some people call them gifts, but not Kale. Kale’s touch means instant death to anyone.

But now there's Dez, the girl he can touch, and they're hunting down Sixes and warning them about Denazen. Kale is learning about the world outside captivity and trying to put his dark past behind him. But they underestimated how badly Denazen wanted him back.

When Dez sacrifices herself to save the new Six they'd rescued from falling into the corp's hands, Kale is lost. Denazen has brought out its best to get the job done. Samsen, a nightmare from Kale’s past—the only person he’s ever truly feared—has come for them, and it soon becomes obvious he has his own twisted agenda.

Kale will need all his training to get Dez back and ensure they all make it out, free--and alive. But will it be enough?

Review:
Untouched is a short novella that picks up the story just after the ending of Touch but this time told from Kale's perspective. Kale and Dez are travelling the country searching for other Sixes to warn them about Denazen but it looks like an enemy from Kale's past has caught up with them and he isn't going to be easy to escape.

I have to admit that while I liked Touch it didn't wow me as much as I expected it to but I'm glad to say I liked Untouched more and am now really looking forward to reading Toxic. As much as Kale is a sweet guy I didn't really warm to him that much in the first book, he is so innocent that he can come across as quite childlike and that isn't really a trait I look for in my heroes. Having part of the story told from his perspective did make him grow on me though. Yes he is very naive when it comes to language and things that happen in the outside world but there is a lot more to him than that and seeing through his eyes helps to show that. I wouldn't mind having more of the story told by him in the future.

I think you would probably be able to jump from Touch straight into Toxic without reading this novella but I would recommend Untouched to fans of the series. It gives us a bit more insight into the things that Kale went through when he was held prisoner by Denazen and it introduces us to a character from his worst nightmares. I would say that if you haven't already read the first story then you'd probably be completely lost trying to read this one though so it wouldn't be a good place to start the series.