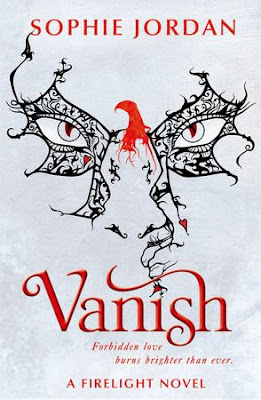 I remember Will's promise:
'It's not over. I'll find you . . .'
Then it dawns on me. He won't know what happened. He'll just think I left. Vanished.

Jacinda did the unthinkable for love: she betrayed the most closely-guarded secret of her kind.

Exposed for what she really is-a descendant of dragons with the ability to shift into human form-she must return to her pride knowing she might never see Will again.

Back home, Jacinda is shunned and her sister, Tamra, is the only one she can turn to. But Tamra is experiencing shocking changes of her own . . .

Jacinda knows she should forget Will, yet she clings to the hope that they'll be together again. So when the chance arrives to follow her heart, will she risk everything?

Review:
Jacinda has been forced to return to the Pride with her twin sister Tamra and their mother but everything has changed since they left home in the first book. Jacinda was the one who never wanted to desert the Pride but now that she has met Will she hates the idea of returning to them and leaving him behind. She also knows that she will be punished by the Pride for risking their safety when she revealed herself to the hunters, her fellow draki had high expectations for her future and they feel badly let down by the way she has behaved. As everything changes around her Jacinda clings to the promise that Will made to find her but even if he does track her down can they find a way to be together? How much is Jacinda willing to risk for love?

I really enjoyed Firelight when I read it last year and it has been a very long wait for the UK release of Vanish. Thankfully it was worth it as I enjoyed this book even more than the first but I'm hoping we don't have to wait quite so long for Hidden to be published over here! I think what I loved most about Vanish was getting to see more of life inside the Pride, that was something I desperately wanted more of in the first book and really enjoyed this time around. Things have been very different in the Pride since Jacinda and her family left though, security has been tightened and the draki are more paranoid than ever about discovery. It doesn't make things easy for Jacinda when they return - especially since most people blame her for what happened even though it wasn't originally her choice to leave them. They will never understand her attraction to a hunter though and it has left her very much on the outside.

In a lot of ways things in Vanish are the opposite to how they were in Firelight. Tamra has always lived in Jacinda's shadow because she never manifested her draki side but that has all changed and suddenly she finds herself at centre stage because her ability is almost as rare and just as important as Jacinda's. It would have been easy for Jacinda to become jealous of her sister so I was really glad that Jacinda was so happy for her. Yes I think there were times Jacinda wished things were different but she never let it effect the way she felt about Tamra and was always supportive of her. It's nice to see that the sisters have become so much closer than they were when we first met them.

Obviously we didn't get to see as much of Will this time which was disappointing but I really liked getting to know Cassian better. He is so protective of Jacinda and Tamra and I think things would have been a lot worse for them without his support. There are some really interesting twists in the story that are going to have knock on effects as the series continues and I'm very curious to see where Sophie Jordan will take things next. Will fans out there shouldn't worry too much though because we do get to see some of Will and Jacinda together and it was worth waiting for, they really are such a great couple that I can't help but route for them.

Fans of Firelight will love this latest instalment to the series but be warned it will leave you desperate to get your hands on Hidden as soon as possible! If you haven't started reading the series yet then I'd definitely recommend reading them in order because you're not going to get full enjoyment out of the story otherwise. Definitely a series to check out though - especially if you love shapeshifters or dragons. The mythology Sophie Jordan has created surrounding the draki is fascinating and I can't wait to find out more.

Source: Received from OUP in exchange for an honest review.