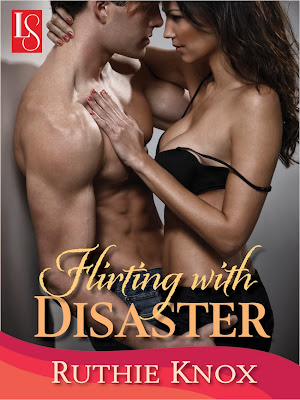 In the latest eBook original novel in Ruthie Knox’s scorching-hot Camelot series, a no-strings fling looks an awful lot like falling in love—or flirting with disaster.

Fresh out of a fiasco of a marriage, Katie Clark has retreated to her hometown to start over. The new Katie is sophisticated, cavalier, and hell-bent on kicking butt at her job in her brother’s security firm. But on her first assignment—digging up the truth about the stalker threatening a world-famous singer-songwriter—Katie must endure the silent treatment from a stern but sexy partner who doesn’t want her help . . . or her company.

Sean Owens knows that if he opens his mouth around Katie, she’ll instantly remember him as the geeky kid who sat behind her in high school. Silence is golden, but he can’t keep quiet forever, not with Katie stampeding through their investigation. It’s time for Sean to step up and take control of the case, and his decade-old crush. If he can break through Katie’s newfound independence, they just might find they make a perfect team—on the road, on the job, and in bed.

Camelot Series:
How to Misbehave (Novella)
Along Came Trouble
Flirting with Disaster
Making it Last (Novella)

Review:
It's been two years since Katie's ex-husband walked out on her taking all of the money from their joint bank account with him. Her divorce went through months ago and Katie has been working hard to rebuild her life working with her brother Caleb at his security firm. She wants to be more than his office manager though and has finally convinced Caleb to let her take her first assignment as an agent. Judah is a famous rock star who has been receiving threatening messages and it is up to Katie to try and find out who is behind them and if his life is really at risk. Of course Caleb wouldn't send Katie off alone so he's partnered her with one of his best agents Sean. Sean has had a crush on Katie since he was a teenager but he gets so nervous around her that he literally can't get his mouth to work properly. Refusing to let her see him stutter Caleb is determined not to speak to Katie at all but as the case pushes them together he finds his attraction to her impossible to resist.

I've been a massive fan of Ruthie Knox ever since I read About Last Night last year and since then I have devoured everything that she has published. I think it is fair to say that I have a crush on all of her heroes but Sean may just be my new favourite (alongside Tom from Ride with Me anyway!). I have a bit of a thing for geeky guys and this stuttering hacker who loves sci-fi (and reads erotic novels) quickly stole my heart. Everyone thought Sean was just incredibly shy at school but it was his stutter that held him back and made him keep himself to himself. His mother only made his problems worse and it wasn't until he moved away from home that he finally got the treatment he needed and started to come out of his shell. Along with his best friend Mike he has used his hacking skills to create a successful internet security company and the only reason he is back in Camelot is to deal with his mother's estate. Something about being back in Camelot and the stress he is under after his mother's death is taking him straight back to his teenage years and bringing his stutter out in full force but it is noticeably worse when he is around Katie. He had a thing for Katie back in school but would never have had the courage to make a move on her but now they're both single and Caleb isn't sure how long he can deny the heat that his building between them. Sean may have a stutter but he is sexy as hell and it certainly doesn't stop him talking dirty once he gets over his shyness and decides to actually talk to Katie!

Katie has been through a lot thanks to her ex so she has lost faith in herself and her abilities, she is determined to reinvent herself into a woman who people will respect and take seriously though. She wants to prove to Caleb that she can be more than just his office manager even though she never got her college degree and when Judah requests her personally for his case it is the perfect opportunity for her to show Caleb what she is made of. She is attracted to Sean but confused by the way he blows so hot and cold with her, he won't talk to her for days at a time but then when Judah shows an interest in her Sean kisses her to make his claim. I have to admit if I'd been Katie there would have been times that I would have wanted to strangle Sean for the mixed messages he was sending. It was only the fact that the story was told from both of their points of view that saved him from coming across as a complete ass at times but because we get inside his head we get to see exactly how messed up and confused he is about his feelings and that just made me love him all the more. Katie is an expert at getting people to open up but Sean seems to be the one person she can't get a read on and she finds it incredibly frustrating.

The romance that builds up between Sean and Katie is incredibly sweet and believable, they have fantastic chemistry but they also have a deeper emotional connection as they both open up and share painful secrets from their pasts. Another thing I really enjoyed was catching up with the couples from Along Came Trouble (Caleb and Ellen plus Jamie and Carly) and seeing how their relationships have been progressing. I'm also very excited that Tony and Amber (from How to Misbehave) have a second novella coming out in July, their previous story was set quite a long time before the series actually starts so it will be good to catch up with them now that they've been married for years and have three children. Ruthie Knox is an expert at writing stories that are full of humour, intense emotions and very hot sex and Flirting with Disaster is no exception. Although this story works well as a standalone I guarantee you're going to want to go back and read the rest of the series, every single story has been one I've thoroughly enjoyed and I would recommend them all to contemporary romance fans.